Lamassus – you don’t see those anymore. Considering the large numbers of representations of these creatures in Assyrian and Persian palaces they must once have been common on the plains of Mesopotamia and on the Iranian Plateau. This animal was a biological marvel: with four legs and two wings it had, like the dragon and the sphinx, six limbs, so that we’re dealing with the order of vertebrate insects.

Unlike the sphinx, in which the body of a lion was combined with a human head and the wings of an eagle, the lamassu had the body of a bull. Both had a particular symbolic meaning: as intelligent as a human, as free as an eagle, and as strong as a lion or bull. An appearance this monstrous, people reasoned back then, must certainly ward off evil. 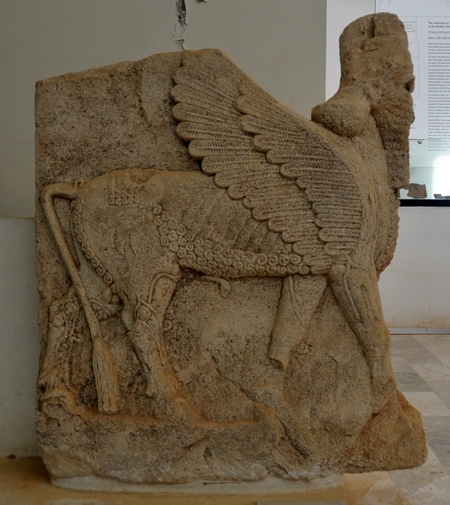 The example shown in the picture, dated to the ninth century BC, come from Tell Ajaja, which is located on the banks of the Khabur River in the east of Syria. I took the photo in the museum of Deir ez-Zor in eastern Syria. It has by now been plundered. Lamassus – you don’t see those anymore.

Note: this was a translation of the original Dutch blog post published on Jona Lendering’s personal website.