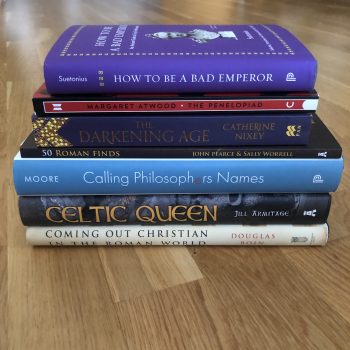 February is here, and we are squarely in the middle of the bleakest part of winter. If you’re not keen on the weather and would prefer to stay indoors curled up with an Ancient History book, I have a few suggestions that just might pique your interest!

Our issue on early Christianity is right around the corner, so my first two picks were to brush up on my knowledge of this turbulent period: Douglas Boin's Coming Out Christian in the Roman World and Catherine Nixey's The Darkening Age. Boin is featured in our upcoming March issue to talk about some misconceptions that people have about early Christians. This book further expands on some of the ideas he mentions in the issue, such as how early Christians navigated their identities in predominantly pagan spaces, and that not all Christians were militant in their new found belief. In fact, the focus of Coming Out Christian is on the quieter voices that were drowned out by the violent, popular martyr stories.

Nixey's The Darkening Age was a controversial pick. She has been derided by some scholars for making generalizations about this period in an effort to demonstrate that Christianity was an all out attack and suppression of Classical culture. However, she has also been lauded for her strong stance on the subject, and for her engaging writing style. It will be an interesting read since it is the polar opposite of Boin's take on Late Antiquity, and I will reserve judgement after I get through all of it.

I always enjoy books that shine a spotlight on the lesser known, but vitally important, figures who were overshadowed by history's bigger personalities. This next book, Celtic Queen by Jill Armitage, fits that bill perfectly. The book is about the life of Cartimandua, a Celtic queen of the Brigantes people. She lived at the same time as Boudicca, but is often all but forgotten in history books. Our September issue will be about women in the Ancient World, so I am greedily reading everything I can get my hands on in preparation.

Another book for those interested in ancient women would be Margaret Atwood's The Penelopiad. This novella is written from the perspective of Penelope, the wife of Odysseus. Having loved Madeline Miller's Circe last year, I was eager to pick up another book that retold the ancient myths from a woman's perspective. Also, Atwood is a phenomenal writer, so it wasn't exactly a hard-sell for me.

Archaeology fans, this next one's for you! From the Portable Antiquities Scheme, we have 50 Roman Finds. A short book (only 96 pages!) that highlights some of the most important discoveries ever made by the PAS. It offers readers a wide cross-section of Roman society by combining spectacular finds with everyday objects. A quick, best-of-the-best in British-Roman archaeology.

Ever been in a tight spot and wondered, what would Caligula do? Well, if you pick up the newest translation of Suentonius' Lives of the Caesars, aptly retitled: How to be a Bad Emperor by Josiah Osgood, you will find out! This book promises to cover all the nastiest bits of Roman history, and its most salacious stories. It caught my attention because our Ancient History Magazine May issue will focus on exactly that: terrible leaders. A perfect "what-not-to-do" manual that should be read by most of our leaders today.

Last, but certainly not least, I leave off with Christopher Moore's Calling Philosophers Names on my TBR list. It may not answer your questions on the meaning of life, but it will certainly help you understand the initial purpose of philosophy by outlining its history, and how the term "philosopher" came about. It also explores how the field of philosophy rose in popularity during its first two centuries. Join me next month for March's Ancient History TBR list!

Pick up a copy of our issue on Ancient Language and Literature!