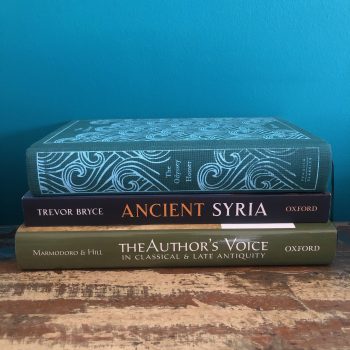 The dog days of summer are here, and as we head into September, I wanted to share what is still lingering on my summer reading list. These three books are my September goals.

The first book on my review list to tackle is Ancient Syria by Trevor Bryce (Oxford University Press). It's an in-depth look at over 3,000 years of Syrian history from the Bronze Age to the Roman era. It covers a broad range of topics from the Persian Empire, Neo-Assyrian world, and Syria during the Roman period, and includes a chapter on modern Syria and its neighbours. I wanted to expand my reading list outside 'the big 3' (i.e., ancient Rome, Greece and Egypt), and this book is my starting point.

The next book on my list is a favourite for many of our readers and needs no introduction: The Odyssey by Homer (Penguin). I picked up this version because it's a particularly beautiful edition to own, and because I'm collecting the Penguin clothbound books. Also, it's translated by E.V. Rieu (1887–1972), the famous British classicist who spent over 20 years translating books for Penguin. It would be remiss not to have this stunning edition grace your shelves.

Lastly, having just wrapped our Roman Family issue, I'm now jumping ahead an issue and preparing for our November magazine on language and literacy in the ancient world by reading The Author's Voice in Classical and Late Antiquity (Oxford), edited by Anna Marmodoro and Jonathan Hill. It looks at the role of the author in antiquity, and covers both Latin and Greek texts. From Pliny and the Regulus Letters, to the poet in the Iliad, Athenian tragedy as popular art, to Plato's religious voice, this book will definitely be a good reference point for examining the inner workings of ancient literature.