If you’re not Apple, Inc, it’s a pretty basic rule that when you plan to launch a new product – or in our case, a magazine – you test the waters. It’s useful to know whether your prospective audience is interested in what you plan to offer or not. In fact, even if you are Apple, it’s useful, it’s just that you’ll probably sell your new product anyway.

So, over a four-week period from the middle of January, we collected survey responses from all online sources that deal with Ancient History we possibly could (thank you Ancient.Eu, Classical History Forum, Livius.org, bloggers, list-owners and everyone I forget!). We had a very pleasing volume of responses – thank you all! – and now it’s time to reveal some of what we learnt.

It’s probably no great surprise that a very large proportion of the respondents are readers of Ancient Warfare and, to a lesser degree, of our other magazines. You come from the same regions of the globe – the Anglo-Saxon speaking countries as well as Continental Europe – in almost exactly the same proportions as we can find in our subscriber database. 94% of respondents are familiar with AW, with Archaeology magazine in second place, followed by MW, BBC History and History Today in that order. Some of the more specialized archaeological magazines trail the pack.

It’s worthwhile to note that some 30% indicate that they are satisfied with the way, depth and detail, the ancient world as a whole is covered in the magazines they already read. To a certain degree this can, again, be explained by the large group of AW readers among the respondents. After all, if you are exclusively, or largely, interested only in the military history of the ancient world, AW already does a good job. That is borne out by the survey results as well and is, in a way, a satisfying comment on the performance of the existing big brother to our prospective magazine. Of course that also means that near 70% has a broader interest and is not satisfied with the narrow focus of Ancient Warfare or the more superficial treatment in other magazines. If we needed confirmation, we got it with the next question: 95% of respondents answered Yes! to the question: “Would you be interested in a magazine dealing more broadly with the ancient world?”

Having established whether the respondents would like a magazine about the ancient world in the Karwansaray house-style, we asked what they would like to see covered in such a magazine. Rather than dishing out the results in text, I think it’s more useful to show the results in graphs (click the images for a larger version). 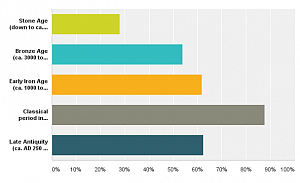 If you’ve read the results of the survey in Ancient Warfare I.1, these results won’t be very surprising either. The Classical Period, with the high-tide of the Greek poleis, the Hellenistic kingdoms and the Roman Republic and Early Imperial Period, is always the most popular. Later Antiquity seems to be enjoying greater interest lately, but the relative popularity of the Early Iron Age is a bit more surprising. We’ll have to pay attention to varieties of Celt, Assyrians, Archaic Greeks and Italic peoples before Rome. 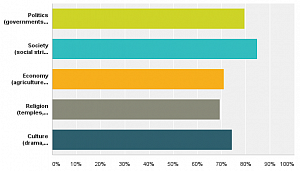 Looking at the results for our question about topics of interest, it’s clear that everyone wants at least a little of everything. Perhaps a bit surprising is the fact that religion seems to be the least favorite topic, while social history, interestingly, leads politics by five procent. 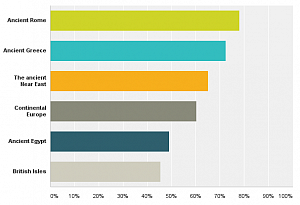 Finally, the geographical division of topics of interest: again, no surprise that Greece and Rome are at the top. That matches the results for favorite period. The rest, too, seems to fit the results above, so thank you for being consistent in your preferences!

Is there anything to conclude from all this? Well, yes. In random order: it’s obvious that a new Ancient History magazine needs to be varied, detailed and more interesting than what’s available on newsstands now. That’s just what we were hoping to see, because that’s what we’re planning to do! Second, and most gratifyingly, it seems that our respondents agree with us: we need a new Ancient History Magazine! Bring on the Kickstarter!

On final item of more down-to-earth administration. We promised we’d give away ten digital subscriptions to AW, MW, or WSS,  as well as five paper subs. I’ll be contacting the winners by email, but just in case your email provider thinks my message is spam: if your email address matches one of the patterns below and you didn’t get a message, please contact us!

Winners of the paper subscriptions:

Winners of the digital subscriptions: