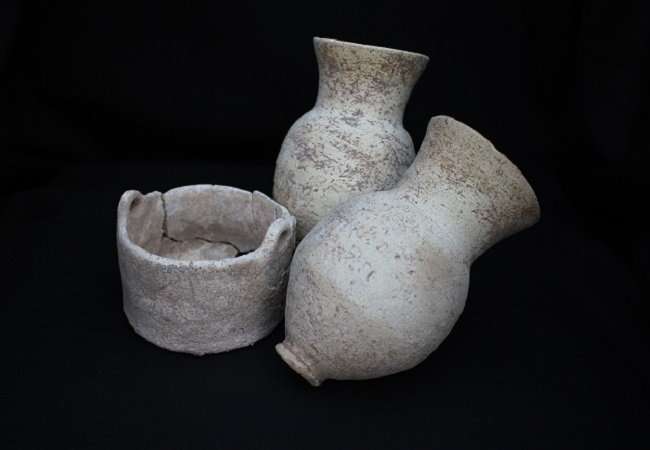 Depicted above are faience buckets, and a cup found at Khani Masi, Iraq. Photo: ©UniversityofGlasgow

What’s new in the Ancient World? Our favourite news piece of the week comes to us from the from the University of Glasgow. For all you beer lovers out there, we’re sharing an interesting and fun little historic tidbit about ancient beer. So when you head out to the pub with your mates, here’s something to chat about over a few pints!

According to a paper published in the Journal of Archaeological Science, we now know that people living in Mesopotamia were avid beer drinkers!

How do we know this? The Sirwan Regional Project under the auspices of Dr. Claudia Glatz (University of Glasgow) has been busy excavating at Khani-Masi in north-eastern Iraq since 2016. The Glasgow team have developed a new analytical method that has allowed them to determine that beer was indeed found in the region’s drinking vessels. Using gas chromatography technology, they were able to detect and measure co-occurring fossil compounds that were once ancient beer. According to Dr. Jaime Toney, a Senior Lecturer in Organic Geochemistry at the University's School of Geographical and Earth Sciences:

"We show that this suite of fossil compounds match those found in modern barley beer—identifying for the first time an important method for revealing the presence of beer, even when there is no visible evidence such as beerstone."

Organic residue analysis has played a key role in the ability to accurately identify ancient alcoholic beverages. This discovery has also been pivotal in understanding beer consumption practices, and Mesopotamian culture and trade in the Upper Diyala river valley. The barley-based fermented drink showed similarities to modern day craft beer, so it appears that people in Mesopotamia have been fans of decent beer for over 3500 years. I’ll drink to that! Cheers!

Want to learn more about ancient news, events, and research?
Subscribe to our magazine!