Art and Alexander the Great

Alexander III of Macedon, or ‘Alexander the Great’ as he came to be known, was perhaps the greatest conqueror of the ancient world. By the time of his death in 323 BC, he had managed to subdue a large part of the known world, and his empire stretched from the Aegean in the west to India in the east, and from Macedonia in the north to Egypt in the south.

Alexander’s conquest helped spread Hellenic influence throughout the ancient Near East, though in truth was often only the upper echelons of society where this influence was felt most keenly, and most people carried on with their lives as usual. In Egypt, Alexander’s general Ptolemy would seize control, and he and his descendants were depicted in Egyptian art like the pharaohs of old. Nevertheless, Greek became the lingua franca throughout much of Alexander’s former empire, even after the Romans conquered most of it.

The influence of Alexander can also be traced in other things. For example, in Classical Greece, in the fifth and fourth centuries BC, it was apparently common for young men to be clean-shaven and have their hair cropped short, whereas older men (at least, among those who were relatively wealthy), wore their hair long and had beards. Alexander chose to be clean-shaven and having his hair relatively short, but not cropped.

The new style introduced by Alexander was quickly emulated by other people. Depictions of Alexander the Great – on coins, as statues, and so on – were commonplace. Other Hellenistic rulers often sought to copy Alexander not just in deeds, but also in appearance (coins of Ptolemy depict him clean-shaven and with relatively short hair).

And let’s take a look at this marble head from the archaeological museum in Rhodes: 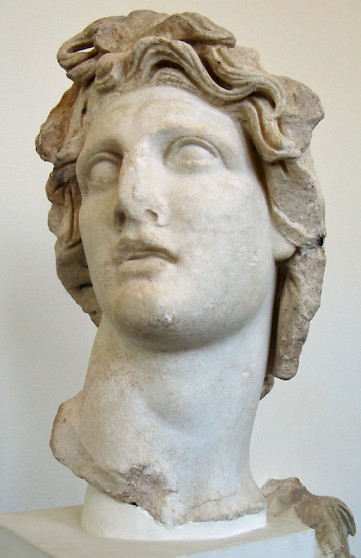 Looks like Alexander, right? Except that this is the head of the sun god Helios, dated to the Middle Hellenistic period. It perhaps was once part of the pediment of his temple. We know that it isn’t Alexander because there are holes around the periphery of the cranium where the metal rays of his crown would have been inserted (these represented the rays of the sun).

Portrayals in this style emulate the work of Lysippus, Alexander’s personal sculptor. It is a testament to Alexander’s deeds that his features were deemed suitable to be used as the template for making images of the gods. But then, hadn’t Alexander himself been declared a god by the Oracle of Ammon at Siwa after he had conquered Egypt (at least, according to some interpretations of Arr. Anab. 3.4.5; cf. 4.9.9)?