Book Review: Coming Out Christian in the Roman World 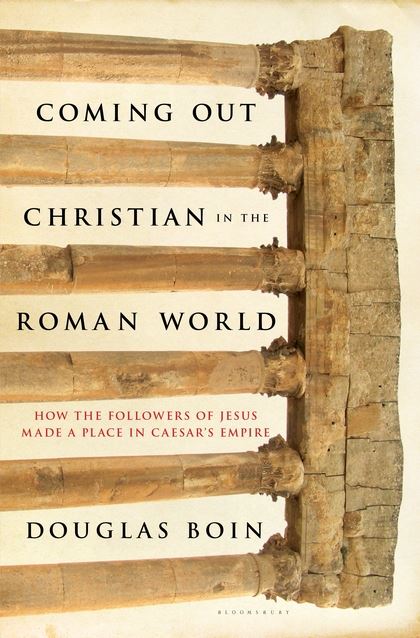 Coming Out Christian in the Roman World: How the Followers of Jesus Made a Place in Caesar's Empire

"Not all of Jesus's followers were martyrs. Many of them lived in the closet and that's why we can't find them." (p.45)

In preparation for the upcoming March issue on Early Christianity and the decline of paganism, I picked up a few books to get myself better acquainted with the subject. The first book on my list, Coming Out Christian in the Roman World: How the Followers of Jesus Made a Place in Caesar's Empire by Douglas Boin, takes a decidedly different approach from the usual accounts of bloodthirsty pagans tossing Christians to the lions, and obstinate, intolerant Christian martyrs. Boin's book turns away from these tired tropes and offers readers a more nuanced side to the story.

This book's focus is to give a platform to what Boin calls, 'the quieter voices' of the early Christian movement, the regular Romans, not just the famous martyrs who usually take up most of the narrative.

"Many men and women were not martyrs at all. Reluctant to antagonize their friends, unwilling to provoke the authorities, they didn't go out of their way to shove their Christianity in anyone else's face...Contrary to what we've been taught–that their lives were irrelevant to the success of the Church–these men and women also played an important role in Christianity's struggle to come out of the closet. By virtue of their creative resilience, not their zealotry, they accomplished the most fundamental thing of all: they taught their Roman friends and neighbors to see Christians in a less threatening light" (p.22)

These 'quiet' Christians, according to Boin, had a massive impact on the spread of Christianity, perhaps even more so than well-known martyrs, thinkers, and early clergy because they didn't come across as threatening to their pagan neighbors or their Roman way of life. In fact, one of the things that makes the book intriguing is the ways in which Christians who considered themselves Romans, or Jews, continued on mingling with pagans and participating in civic life. Coming Out Christian sheds light on what it was like in Christianity's earliest days for those who saw still themselves as part of the Empire, and how they reconciled things such as serving in the army, or attending public festivals, yet maintaining their "Roman-ness" while developing their newfound religious identity. Boin suggests that even after Constantine's conversion in AD 312, Romans still went about their daily lives in much of the same way they had before - there was no sudden mass conversion or rush to abandon pagan temples. In fact, temples continued to be built well into the fifth century AD. Life went on as normal for 60 million Romans under Constantine's rule.

Given that this was the case, why have these voices been scrubbed from history? Boin's book explains why we hear so little from such a seemingly large part of Roman society. Simply put, the reason that martyrs and fiery clergy remain the proverbial "poster children" for the early movement that they did not try to "fit in".  They were extreme, loud in their condemnation, and in many cases, died in a blaze of glory – their short lives were memorable, and their stories were passed down throughout the ages. It is difficult to capture the stories of the every-day early Christians precisely because they did the opposite: they tried to fit in. For example, they partook in civic festivities because not much was really required of them. According to Boin, no civilian was ever asked to physically slaughter a beast - the only requirement was that they be there for the event and then share in the meal afterwards. For many early Christians, this wasn't too much to ask and allowed them to continue their way of life while maintaining their personal relationships and larger societal expectations. Early Christians weren't interested in ostracizing themselves, they just wanted to carry on living their lives peacefully.

In Coming Out Christian, "the meek" do indeed inherit the earth. Boin's books lifts up early Christian voices, examines their everyday lives, and demonstrates how Romans, Jews, and Christians navigated changing laws, and came to terms with new identities. This book is about the shades of grey that often get left behind when talking about turbulent periods of history. It shows us that early Christians did not all share in this stark, all or nothing, black or white interpretation of their faith. Coming Out Christian shows another side of life in Late Antiquity and the Early Medieval period, one that is not so widely known or discussed, yet remains a vital piece to the puzzle in understanding this transitional time, and understanding who really pushed Christianity forward, and why paganism declined. For those studying this period or who have an interest in the early Church, it is a must-have addition to your bookshelf.

Interested in finding out more about this topic? Douglas Boin is featured in the upcoming March issue of Ancient History Magazine! Subscribe today!