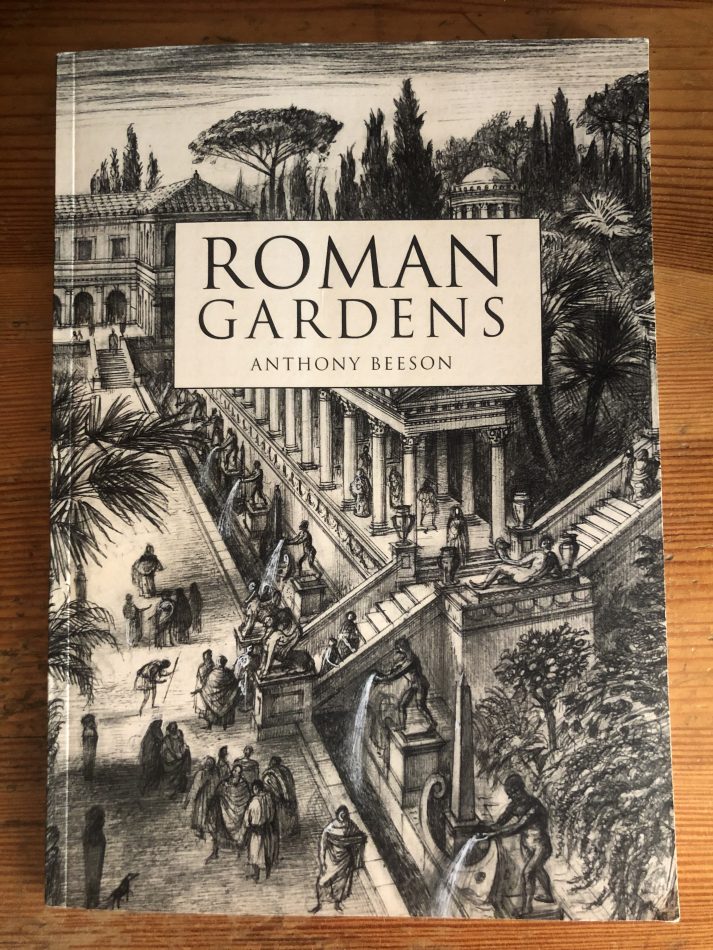 Romans loved their gardens, and Anthony Beeson brings readers that love in this brief synopsis of gardening in his book, Roman Gardens. The book is not chronological – each chapter is devoted to a type of Roman garden versus a particular period in its gardening history. It begins by listing the deities that were sacred to gardens because religion played a vital role in all aspects of Roman life. Gardens often featured deities such as Priapus, Venus, Diana, and Bacchus; because gardens were not just places where one could admire the beauty of nature, but they were important as religious spaces, and used for veneration as well as leisure. Beeson continues through the following chapters touching on the various uses of gardens, such as funerary, garden motifs on sarcophagi, public gardens, the famous hanging and sunken gardens, as well as the various uses of water in gardens (Nymphaea), such as fountains, pools, and the decorative geometric islands that were popular during this time. Beeson also discusses other common garden features, such as Herms, four-sided stone or bronze pillars that initially sported the head of Hermes (in later periods, they included the heads of other deities), and often a phallus as a symbol of fertility. Herms were believed to help ward off evil, similar to purpose of the painted terracotta Oscilla that were suspended from trees and chimed in the breeze. Lastly, book discusses the importance of gardens as status symbols in aristocratic circles and how their designs changed according to fashion, or the whim of particular emperors.

The book offers a concise introduction to the world of Roman gardens, (it is only 96 pages long), but it’s focus is not so much on the actual plant life and botany behind gardening in ancient Rome, but more on the significance of these beautiful spaces and how they were used across the empire. It is technical, making it a bit difficult to follow if you are completely new to the gardening world or to Roman architecture and unfamiliar with its terminology. In spite of this, the book is still worth a read if you want to know more about ancient gardens and why they were so prized by the Romans, or interested in perhaps recreating a Roman garden yourself! The book is available on Amazon and the Amberley Publishing website.

Want to learn more about the Romans and other fantastic ancient cultures?
Subscribe to our magazine!