Book Review: The Archaeology of Manchester in 20 Digs 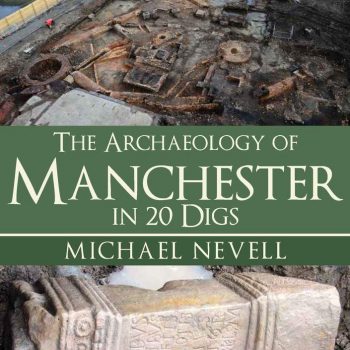 The Archaeology of Manchester in 20 Digs

The next book on my TBR "lockdown list" is another short book from Amberley Publishing, and it is latest release in its archaeological series.  The Archaeology of Manchester in 20 Digs encompasses Manchester's entire history; from the first Mancunians residing on early Bronze Age farms discovered when construction began on the city's second runway, to the Reno, a popular 1980s funk and soul spot for Manchester's African and Caribbean communities. The book also highlights the sustained efforts that began in the 1970s to protect Manchester's rich local history, while also fostering a sense of community identity by including residents and school children on digs. It is not set in chronological order in terms of historical periods, but more in line with when the actual digs took place along with the development of various archaeological societies.

For ancient historians, aside from the early Bronze Age, the few digs that are of interest in this book are Roman. Most of the discoveries date the the middle of the second century AD. There are early Christian finds, such as pottery shards found etched with the words PATER NOSTER. The book also takes a quick look at the Roman cemetery and Vicus (neighbourhood) at Great Jackson Street. The dig uncovered a Samian bowl depicting a hunting scene, and the name of one of the first Mancunians: Aelius Sextus, who left his named carved into a stone altar. Interestingly enough, this site was abandoned and wasn't built upon until the late eighteenth century. Another dig at the north gate led to the opening of a heritage park in 1982 that displays the Roman remains of the area. While the rest of the book focuses on medieval, Elizabethan, Georgian, and Victorian digs, The Archaeology of Manchester in 20 Digs is still of interest for those curious about the local archaeology of the area and to see how public spaces in Manchester evolved and were used over time. Pre-order your copy now.

Love archaeology? Want to immerse yourself in the Ancient World?