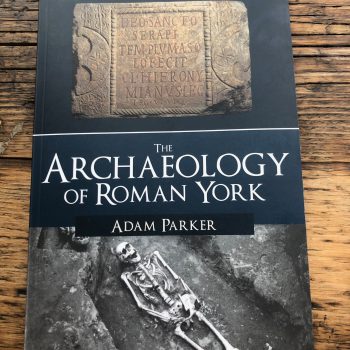 Books written about Roman Britain tend to focus on London, a.k.a. Londinium. Amberley Publishing just released its latest entry into Roman Britain in an effort to change that trend. The Archaeology of Roman York by Adam Parker hit the shelves this June and offers a short, but comprehensive, overview of the city once known as Eboracum.

The Archaeology of Roman York begins by explaining some of the difficulties archaeologists encounter when trying to access York’s Roman past. The problem is the same in many English cities that have a strong Roman heritage - there are layers upon layers of protected artefacts from different periods that cannot be disturbed in order to reach the Roman remnants. These are medieval and early modern objects and foundations that were built on top of the Roman levels. This makes studying Roman Britain a little more tricky for archaeologists so they must make do with the pieces they find outside these core areas.

The city was founded in AD 70 as a reaction to anti-Roman sentiment in the area, predominantly by the Brigantes tribe. The small garrison that settled there eventually grew a thriving city around it. It was soon counted among only four other cities that carried the honour of being considered a proper Roman colonia.

Parker provides an interesting glimpse of daily life in Roman York, with chapters devoted to different aspects of northern Roman culture. He is the perfect person for just such a synopsis – since he is the Curator of Archeology at the Yorkshire Museum, with a background specializing in prehistoric, Roman, and medieval archaeology.

He examines the burial of the dead outside the city walls (done for hygienic reasons), tackles curious archeological discoveries, and discusses the payment all soldiers made in common to bury their dead. He also touches on the evolving burial fashions, from cremation in the first and second centuries AD, to inhumation in the third and fourth centuries.He looks at religion, and the different mix of Classical and Eastern gods that Romans in York worshipped – from Jupiter, to Isis, to Serapis, and Mithras (whose mystery cult was popular with soldiers), to the beginnings of Christianity. There are chapters on dress and dining - answering the questions: What did the people of Roman York eat? How did they dress? He discusses the strong influence the Imperial family wielded on fashion at this time; Hadrian’s beard became a popular style until the early fourth century when it switched after Constantine I favoured a clean-shaven look.

Lastly, Parker talks about entertainment – how Romans in York enjoyed themselves. He mentions gladiators and games, and the current controversial debate about whether York had an amphitheatre. Romans also took part in literary entertainment, and of course, public bathing – which was very much a community activity. Since there were no ‘locker rooms’ most bathers wore their jewellery to prevent theft. This Roman precaution has been a boon for modern archaeologists, who found plenty of ring intaglios (semi-precious ring stones) at the bottom of these bathing areas.

The Archaeology of Roman York is neither a sightseeing guidebook nor in-depth chronological study. It is a collection of history, activities, and topics about Roman life that help the reader gain a basic understanding of the inner workings of Eboracum between AD 70 – 410.

Parker initially wrote the book to help his adult students, who did not all come from academic backgrounds, answer questions about life in this former Roman city. He wanted to help bridge the the gap between academic and general knowledge. The book certainly keeps its promise on that front. While it is short – only 96 pages long – Parker manages to cover enough ground in an interesting and engaging way, to convey the most important aspects in understanding York’s Roman history. The book is an excellent starting point for those new to Roman Britain, and for those who wish to know more about York’s rich and vibrant Roman past.