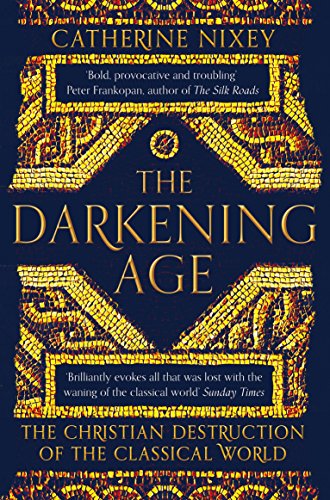 "To oppose another man's religion, to repress their worship – these were not, clerics told their congregations, wicked or intolerant acts. There were some of the most virtuous things a man might do. The Bible itself demanded it." (p.24)

The Darkening Age by former Classics teacher, now journalist, Catherine Nixey is another book I selected for reading prior to the release of the latest issue of Ancient History Magazine, which deals with the decline of paganism and the rise of Christianity.

In a nutshell, Nixey's book takes a hard look at how the first Christians treated their pagan neighbours, tackles the whitewashing of Christianity by later scholars, and exposes the fundamental role Christians played in the destruction of pagan culture and life.

The book starts not at the beginning, but at the end of pagan worship, in a now predominantly Christian world in the sixth century as the last of the true philosophers, Damascius, flees Athens. He is forced to shut down the famous Academy school, and bid goodbye to a philosophical tradition that stretched back centuries. The book isn't a chronological step-by-step look at how Christianity turned the tables on a predominantly pagan population in the span of a few centuries. It hops from place to place, through different times, focusing more on the various aspects of Christian belief and development.

The Darkening Age explores violent fringe Christian sects, like the circumcellions, who initially were used to strong arm pagans, but later on, spun out of the control of the Church and began to attack Christians who didn't subscribe to their ways (there were, in essence, little more than a death cult). It also looks at the rise of monasticism and asceticism – a slow, starving road to death – as an answer for those who couldn't revel in the quick, flashy glory of martyrdom.

"Roman emperors wanted obedience, not martyrs. They had absolutely no wish to open window's into men's souls or to control what went on there. That would be a Christian innovation." (p.78)

If you were denied a martyr's death, this would be the next best thing, a life that consisted of the mortal renunciation of the flesh.

The book also explores the growing intolerance of pagan worship in a mere fifty after Constantine's death, the mob destruction of temples, and the ways in which pagans fought back to maintain their way of life. But perhaps what is most interesting about the book is the examination of this intolerance, and her attempt to answer why Christianity wasn't satisfied with being merely another religion that marched along amiably with others in the Roman Empire. This was echoed in the plea of the fourth century orator Symmachus, who lamented:

"Whatever each person worships, it is reasonable to think of them as one. We see the same stars, the sky is shared by all, the same world surrounds us. What does it matter what wisdom a person uses to seek for the truth?"

This is the heart of this book, a blow by blow rendering of the refusal to co-exist, and the increasing opposition to anything that wasn't Christian, much to the confusion and consternation of many Romans. "For a long time, Romans struggled to understand why Christians simply couldn't add the worship of this new Christian god to the old ones." (p. 77). It was a problem that didn't go away, but grew as time went on, and is still hotly debated amongst scholars.

Nixey definitely has a flare for writing that is evident across every page. Her prose makes for a lively and exciting read. She has come under some criticism by scholars for not exploring certain topics at length, and for not tempering the tone of the book more, in the sense that pagans weren't exactly always preaching 'live and let live'. However, Nixey makes this approach clear from the onset in her introduction that this isn't a book that is an all-encompassing study, but a collection of stories and examples that have been swept under the rug and deserve to come to light. She is not here to attack Christianity, but to discuss the elephant in the room when it comes to this idea that Christians were the heroic preservers of Classical writing and traditions. They were to a degree, but they destroyed much more than they saved and that is the thrust of her argument. If you're looking for an exciting introduction and alternative perspective on this topic, this is a great book to add to your shelf.

Interested in learning more about paganism and early Christians?