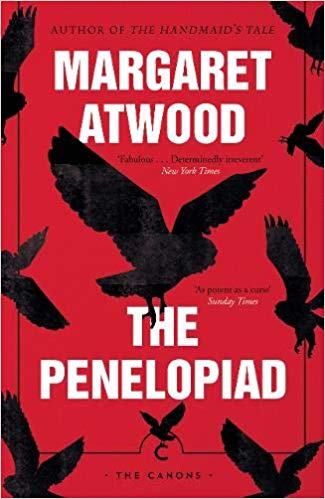 In celebration of March as a month to cheer on and recognize the achievements of women, I’d like to recommend an old Greek myth with a new feminist twist. Renown Canadian author, Margaret Atwood, has recounted parts of The Odyssey from the perspective of Odysseus’ wife Penelope and her twelve hanged maids. This book is part of a greater series entitled The Myths, where authors take classic tales and reimagine them with modern sensibilities.

I thoroughly enjoy this kind of retelling. Last year, I read and reviewed Madeline Miller’s Circe, which also told the story of The Odyssey, but from the nymph-sorceress Circe’s perspective. I was hooked. It cast the story in an entirely new light. Atwood’s Penelopiad continues in this tradition, giving Odysseus’ quiet, pious, and steadfast wife, a voice of her own. Interspersed between Penelope’s tale are the poems and bawdy tunes sung by the twelve hanged maids; who in death are able to redeem themselves and show the audience that they got the story wrong, offering a 'here is what really happened' version of events.

Atwood, in a nod to ancient storytelling, made the hanged maids' parts choruses, to mimic the ones used in ancient Greek drama. Their chorus is full of scathing sarcasm and blistering condemnation – a healthy dose of which is reserved for Penelope, since she didn’t do enough to save them. They call out the hypocrisy of their treatment due to their station and their gender. They are angry; Atwood purposely giving them the agency that, to a modern reader, resonates with the voice of the current #mettoo movement. One of my favourite aspects of the twelve hanged maids is that they remain wholly unlikeable – Atwood doesn't try to make them respectable women. She hasn’t polished them and make them palatable for the reader. They are meant challenge the idea of what a “good woman” should be and how she should act; they do away with the notion that a "good woman" should be demure and obedient, yet sexually available. The hanged maids provide a direct contrast to Penelope’s piety and faithfulness, and they are brilliant. I loved them for all their ugliness and catty glory.

with every goddess, queen, and bitch
from there to here
you scratched their itch

However, as much as Penelope tries to help the maids, raising them as her own and bringing them in on her secrets, the gulf in class between them is too great for Penelope to ever truly understand their plight. Both Penelope and the maids suffer, but the maids pay the terrible price for aiding her.

The story itself is told from the Fields of Asphodel, and goes beyond the events of The Odyssey. It dips into Penelope’s early life and her often difficult relationship with her beautiful (but horribly cruel and vain) cousin, Helen of Troy. Nastiness is timeless; the book does a good job of demonstrating the backbiting and bullying women often heap upon each other and its terrible result. Much like Circe and her rival Scylla, Penelope is cast as the smarter of the two women, yet downtrodden, plain, and often invisible. The Penelopiad lets her shake off this image and recreate herself into a cunning, strong, and clever woman. Even though the end result is the same, the men play second fiddle, giving the reader a perspective that is refreshing, and darkly funny.

If you are a fan of ancient Greek myths, but want to read something that celebrates and gives voice to women, Margaret Atwood's The Penelopiad is a must-read for March.