Sometimes, we are very fortunate as far as our sources for the ancient world are concerned, such as when you can link archaeological evidence to information gleaned from written texts. Take, for example, this cup (the original file is from Wikimedia Commons): 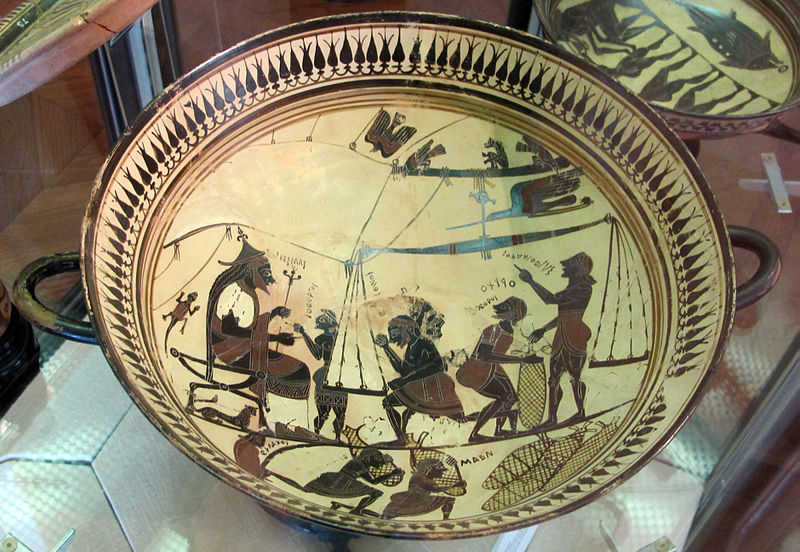 This is a fascinating object. It was made around 560 BC in Laconia, so in a workshop in or near the city of Sparta. In textbooks on Early Greek art, this cup is usually cited as an example of the vibrant art of vase-painting in Laconia in the mid-sixth century BC in particular (since it compares well with the austere reputation that the city-state possessed from at least the fifth century BC onwards). Archaeologists discovered this cup not in Greece, but in a grave in Vulci (Etruria), where the original owner probably found the subject matter of interest.

The scene on the inside of the cup is a commercial one: a number of figures are weighing and loading some kind of good, perhaps bales of wool. The figures weighing seem to be standing on a floor of some kind – perhaps, it has been suggested, the wooden deck of a merchant vessel. The stacking of the goods recalls, as John Boardman has pointed out, similar depictions from Egypt.

The awning features a variety of birds, as well as a monkey. The little leopard (or cat?) underneath the chair of the seated figure further suggests that the scene is set in an exotic location. The figures are given name labels, one of which makes clear that the seated figure’s name is ‘Arkesilas’, i.e. Arcesilaus II, the King of Cyrene known from sources such as Herodotus’ Histories. The scene must be set in Cyrene, the capital of Cyrenaica, and shows the King overseeing the weighing and loading of goods.

Arcesilaus was a member of the dynasty of the Battiads, the son of Battus II. According to Plutarch, Arcesilaus was nicknamed ‘the Harsh’ because of both his appearance and his behaviour. On the cup, he is shown in a comfortable pose, wearing a petasos (sun hat) and holding a sceptre in his left hand. As a high-ranking figure, he is depicted as much larger than the other human characters.

Why would this king be depicted on a Laconian cup? Contrary to what some might believe, Sparta maintained normal trade relations. Archaeology has confirmed that they also traded with North Africa. Cyrenaica was famous for one trade good in particular, called silphium, a type of plant that is now extinct, but which in ancient times was used for medicinal purposes and for seasoning. It has been argued that the bales of wool depicted on the cup are actually sacks of silphium being weighed and loaded onto a ship.

This cup – the ‘name vase’ of the Arkesilas Painter – is thus loaded with information. The object itself was made in Laconia and somehow ended up in Italy. The decoration features a scene set in Cyrenaica, with a depiction of a king known from written texts. The ancient world may have come down to us in fragments, but sometimes we’re fortunate to get a number of different pieces of the puzzle that fit together and offer more than a fleeting glimpse into the past.