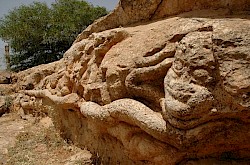 The day before yesterday, Edwin wrote about the Psylloi, and mentioned, at the end of his article, that several ancient authors attribute to the Libyan tribe a remarkable resilience to snake-venoms. That would be one of those countless ancient ethnographic stories which, back then, sounded plausible and were repeated by even the most intelligent writers, but fail to convince us. We wonder what on earth made a talented man like the elder Pliny believe that it was the custom of the Psylloi “to expose children at birth to extremely fiery snakes, and to use these snakes to test to faithfulness of their wives, since snakes do not flee people born of adulterous blood” (Natural History 7.12).

We will never understand the reality behind these stories, even though we know an archaeological site that may somehow support the stories about the Psylloi and the snakes: Slonta. It is hard to date precisely, but a Ionian column base proves that the site was in use in Antiquity. The main relief represents a big snake.

Was this place some kind of temple? We don’t know. Travel guides say it’s a sanctuary, but it’s public knowledge that when archaeologists don’t know what they’re excavating, they often say that it’s religious. That doesn’t mean, however, that it’s never true. In this case, the sculpture – a snake with the head of a human and a  tail resembling a hornless goat – is just too weird to represent a real snake. It must be a creature form mythology, which in turn suggests that we’re dealing with a sanctuary indeed.

There’s also a table, which is decorated with all kinds of figures, and a relief of women who are looking as if they are very scared. It is tempting to believe this was one of the places where the native Libyans exposed their children to a fiery snake and tested the faithfulness of their wives, but probably, we should resist this temptation: there’s just no real proof that we can connect the texts to this sanctuary.

What we do know, however, is that someone traveling along one of the main roads of the Greek and Roman Cyrenaica, could visit a place that was clearly important to the local people, but did not show real signs of Greek or Roman influence. Except for one column base, there is no evidence for Hellenization or Romanization. In Antiquity, this was most unusual.