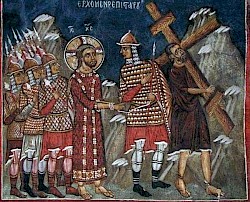 Cyrene was the hometown of many famous Greeks. Eugammon was the author of an important but lost poem about the events after the homecoming of Odysseus, the Telegony. Mathematician Theodorus of Cyrene developed the theory of irrational numbers. Another Theodorus was one of the founders of atheism. Callimachus was one of the most influential poets of Antiquity, while Eratosthenes was the first to measure the circumference of the earth. Philosophers of the Cyrenaean School taught that pleasure was the best thing in life.

They are all forgotten or almost forgotten. The best remembered Cyrenaean is a Jew named Simon, who is mentioned in the gospel of Mark (15.21).

And they compel one Simon a Cyrenian, who passed by, coming out of the country, the father of Alexander and Rufus, to bear his cross.

That’s all. Pilate has condemned the King of the Jews to the cross and Jesus has to carry the instrument of his execution to Golgotha. This humiliation was quite normal and it will not have been uncommon that the condemned could no longer carry this weight and collapsed. Nor was it unusual that the soldiers compelled a bystander to take up the cross.

So, Simon is chosen, performs corvee, and recedes into the mists of history. In the Gospel of John, he is not mentioned at all: the evangelist explicitly states that it was Jesus himself who carried the cross (John 19.17). It’s as if the author of the fourth gospel wanted to eradicate Simon’s role. The most famous Cyrenaean is hardly more than a name.

However, Simon is not completely without background. Mark adds three pieces of information. The first of these is that Simon was coming from his work in the fields. This means that someone from Cyrene owned land at walking distance from Jerusalem: he must have been an immigrant. It also means that he did not belong to Jesus’ inner circle of Galileans. He just happened to enter the Jaffa Gate at the wrong moment.

That he was a passer-by, is confirmed by a second clue. If Simon came from the fields, he had been working on Friday morning. To Jesus’ followers, this was something remarkable, because in Galilee, people did not work on the preparation day before Passover (Mishna, Pesahim 4.5). That’s why Mark mentions it. Now, if Simon had been working on his land on Friday morning, he definitely followed the Judaean Halakhic rules and cannot have been a member of Jesus’ inner circle. He was an outsider.

However, Simon’s life changed. Again, Mark tacitly offers vital information: he says that the Cyrenaean was the father of Alexander and Rufus, who are not introduced. Apparently, they were already known to the readers of (or listeners to) Mark’s gospel, which can only mean that they were Christians. It seems highly likely that Simon accepted the new branch of Judaism too.

Simon’s migration from Cyrene to Jerusalem, his land near the city, his adherence to the Judaean Halakha, his initial indifference to Jesus’ message, and his conversion are not mentioned explicitly. We can deduce them from one single verse in the Gospel of Mark because we know quite a lot about ancient culture.

What is true for the Gospel of Mark, is true for every other ancient text. You cannot read it in isolation. You need to read other texts, you need to study the material culture, you need to know about topography. It’s why Ancient History Magazine wants to combine all approaches. Not because it’s hip to call yourself “interdisciplinary”, but because it’s the only way to approach the ancient evidence.