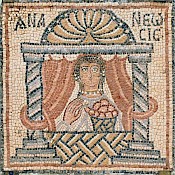 When Synesius died in 413 AD, he feared that Cyrenaica would be conquered and completely destroyed by Laguatan nomads. “They have taken the land as if in a dragnet,” he wrote in his Catastasis. In Letter 73, he describes how the people in Cyrenaica felt abandoned by the central government. This may be a bit exaggerated, because Synesius also mentions effective military leaders. Still, it seems that the area was undergarrisoned. Other areas of the Empire were even more threatened and Constantinople needed the soldiers.

By the end of Synesius’ life, the nomads were in control. Cyrene had been abandoned and only the ports along the coast were still controlled by the Empire. Writing much later, Byzantine author Procopius described the situation in Cyrenaica as “neglected”.

Or so it seemed, because the Empire was still able to strike back. Procopius’ judgment is the introduction to what he has to tell about the renewal of  Cyrenaica during the reign of the emperor Justinian (r. 527-565). Although the details are poorly understood, we know that the garrisons were reinforced and that there were several new forts, such as Antipyrgon (Tobruk) and Paraetonium (Marsa Matruh). These locations, in eastern Cyrenaica, suggest that the coast line between Apollonia (where several churches were built) and Alexandria was what mattered – in other words, the trade route from Egypt to Cyrenaica to Greece.

In 533, general Belisarius reconquered Carthage, which proves that in these years, Justinian was focused on the southern parts of his Empire. We also know that in 539, the city of Theodorias was founded. In his Buildings, Procopius mentions other new fortifications in a port called Boreum, in Berenice/Euesperides (modern Benghazi), in Taucheira/Arsinoe, in the old provincial capital Ptolemais, and around two monasteries.

The reorganization, the Ananeosis (“renewal”), gave Roman-Byzantine civilization in the Cyrenaica a new lease of life. The best proof that Justinian’s policy had been a success, is that one century later, the Cyrenaica was a logical target for Arabian expansion: after the conquest of Egypt, the renewed cities were added almost immediately.