The National Museum of Antiquities in Leiden re-opened last month after having been closed for renovation. It isn’t completely done yet (the Egyptian department, for example, will be revamped this year), but at least the new permanent exhibition devoted to the Classical world (Greeks, Etruscans, Romans) is now again open to the public.

Perhaps unsurprisingly, given some of my comments in the past, I have strong reservations about the character of the new exhibition and the approach that the museum has taken, which I will share next month on my soon-to-be-resurrected personal website. But the fact of the matter is that the collection in and of itself is excellent, and contains some great pieces of ancient art, and the museum itself is definitely worth a visit if you happen to be in Leiden.

One of these objects is a giant head of Dionysus, the god of the vine, known as ‘The Leiden Dionysus’. If you read my previous blog post, you’ll notice that Dionysus here is again modelled after portraits of Alexander the Great: note the hair and the clean-shaven face, as well as the large eyes apparently fixed on the sky. 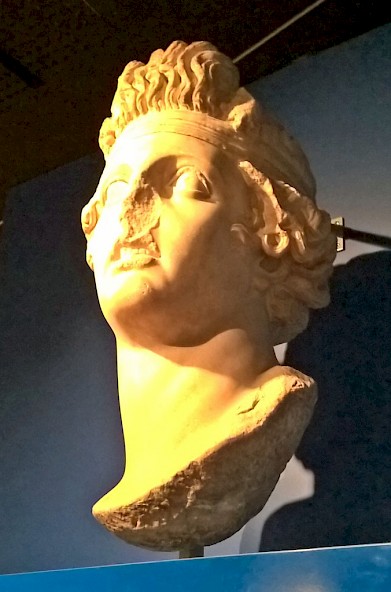 The head is made of marble and comes from a sanctuary dedicated to Dionysus on the island of Teos. It has been dated to AD 117–138 (i.e. the reign of the Emperor Hadrian, although the description does not state this), but the sculpture was probably modelled after a Hellenistic original from the third century BC.

But what I find really interesting about this piece of sculpture is how it ended up in the museum. It’s not normally something that a lot of museums provide information about, especially as the acquisition of many objects have close ties to a country’s colonial or imperial past. But in this case, the museum does provide some details: it was sent from Smyrna to the Netherlands in 1732 by consul D.A. de Hochepied. In other words, it was acquired in a time when wealthy and often powerful individuals could simply purchase or otherwise acquire antiquities in a foreign country and then have them shipped back home.

Such objects pose interesting problems, which you might be familiar with from debates surrounding the Elgin Marbles, acquired at the beginning of the nineteenth century and soon afterwards purchased by the British government and put on display at the British Museum. What you might not know was that even in these early days of collecting ancient objects, the decision to acquire and keep these antiquities was not uncontroversial.

One of the things that an archaeological museum ought to do, in my opinion, is tackle these issues head on. Are some objects tainted? Should objects acquired in a perhaps dubious way be returned to the country of origin? Why yes or why not? A museum need not give answers – indeed, I don’t think there are any simple answers in these cases, especially not when an object has been part of a museum’s collection for centuries.

But discussing these issues is just as much a part of modern archaeological practice as the collecting and displaying of ancient objects. As such, archaeological museums shouldn’t hesitate to state more clearly how they came by the items in their collection.