Exciting new discoveries at the Sanctuary of Great Gods 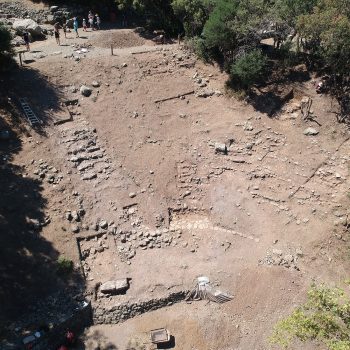 Excavations at the theatre at the Sanctuary of Great Gods, Samothrace, Greece. ©Ministry of Culture and Sports. Ephorate of Antiquities of Evros.

While we're busy working away on next issue on The Greek Gods, you can read about this exciting discovery at the Sanctuary of Great Gods on the Greek island of Samothrace!

Researchers led by Emory professor, Bonna Wescoat, have uncovered some remarkable finds in an ancient theatre. Emory University, in collaboration with the Institute of Fine Arts of New York University, were busy excavating in the area over the summer after a 22-year hiatus. They wrapped up their work on August 8th. The sanctuary had been excavated as far back as 1873 by Austrian archeologists, and again in 1923. It was believed to be the site of a religious activity since the seventh century BC, but the buildings date to the fourth century BC.

The focus of the dig was on a 340-foot-long roofed stoa, and the court section where there was once a statue of Nike of Samothrace. A plaster replica stands in its place since the orginal statue has been in the Louvre since 1883. New fragments of the theatre were uncovered, including a cermaic pipe that ran underneath it, and decor from its interior walls. In addition to these exciting discoveries, over 1700 limestone pieces have been found! A 3D model of the santuary is underway. It will provide a better understanding of the architecture on the island, along with a detailed analysis of the materials used to build the sanctuary.

Dr. Wescoat’s is a professor of art and architecture in ancient Greece. She has been travelling to Samothrace and undertaking archeological digs since 1977 to help shed light on the important history of the Sanctuary of the Great Gods.