I’ve just returned fresh from lecturing on Greek mythology again and so, once more, I find myself inspired to write about something myth-related. (Don’t worry, there will be an end to the deluge of Greek mythology-related posts as I’m preparing some other stuff to write about, too!)

Anyway, I’m frequently asked if there are any good movies out there that lovers of Greek mythology can go and watch without having to worry too much if the makers play fast-and-loose with established stories. I’ve already blogged about Heracles, of course, and there are no movies about that hero that are very accurate (even if some are authentic to a greater or lesser degree to the spirit of the original stories).

Wolfgang Petersen’s Troy (2004), for all its flaws, is a good attempt, I think, at summarizing the main plot of the Trojan War and the story of the Iliad in particular. Yes, Achilles (Brad Pitt) should be dead before the Greeks even think of building the Trojan Horse and, indeed, the war lasted ten years according to our sources and not just a few weeks. There are also all sorts of problems with the costumes and sets, where stuff from different periods is mixed freely and all sorts of Hollywood fantasy is added, too.

But the main point is that Troy, despite not being very accurate, is still, I would argue, authentic. It may change some plot elements around and cut out some characters, but the overall story and feel of the Homeric Iliad is present and accounted for. The way I see it, is that it might be considered an abridged version of the famous tale, something a father in Classical Greece might tell his son before bedtime.

The scene where Achilles and his Myrmidons storm the beach at Troy is exhilarating and captures, I think, what such an action by a small warband, consisting of a leader and his followers, might actually have looked like. In fact, I’ve given lectures on Homeric warfare and used this scene to give an idea of the flavour of Homeric combat. The director’s cut of Troy adds some much-needed blood and grit, making the battle scenes even more authentic.

Some lines are even lifted directly from the original sources, such as Agamemnon saying that of all the warlords beloved by the gods, he hates Achilles the most. Or the scene in Achilles tent where Priam begs the great Greek hero to release the body of his son to him. Of course, the film makers skip the part where Priam also offers gold to bribe Achilles and instead they chose to emphasize the emotional aspects of the exchange. That’s an acceptable choice to make. 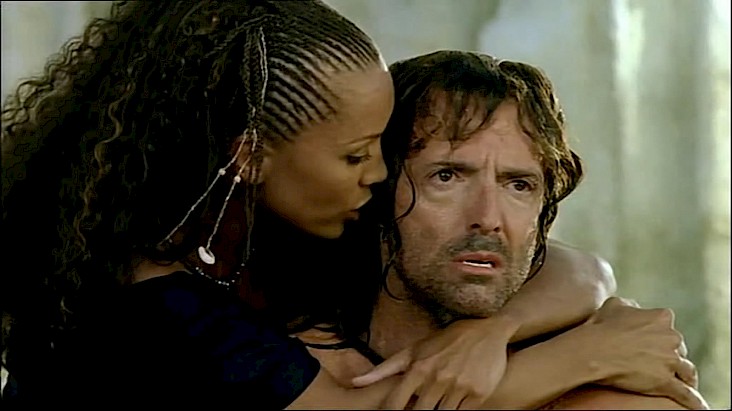 Another good adaptation of a Homeric poem is the television miniseries Odyssey from 1997, starring Armand Assante as the scruffy-looking eponymous hero and Isabella Rossellini as the goddess Athena. This miniseries sticks quite closely to the original poem. Perfectly acceptable special effects (for 1997) make the show come alive, with an interesting take on the sea god Poseidon and an almost perfect rendition of the cyclops Polyphemus. Really, this show is great, even if some of the acting is less than stellar at times.

There are also plenty of movies out there that I wouldn’t recommend. The original Clash of the Titans (1981) is a fun romp, but also a bit of a disjointed mess. The 2010-remake starring Sam Worthington – who’s acting is so wooden that I’m convinced he’s made of solid oak – has great special effects, but the plot is all over the place (if I recall correctly, there were rumours that it was heavily cut and/or reshot in a late stage).

The 2012-sequel, Wrath of the Titans, builds on its predecessor and paints a picture of ancient Greece in which mortals have lost faith in the gods and the divinities themselves are dying. That is something more typical of Norse rather than Greek mythology. The Greeks had, by and large, a cyclical sense of time, and the notion of the gods dying off would have been entirely foreign to them (despite the account of the god Pan dying for people’s lack of faith in him). As a result, the movie seems to owe more to the God of War videogames than to actual Greek mythology. It is neither accurate nor authentic and that, considering the budget and the lavish special effects, is a real pity.

This is certainly a topic that I’ll revisit in the future. There’s a lot more that I would like to write about these and other movies, so you can look forward to that, I hope. And certainly, if you have any tips, feel free to leave a comment below or send me an email or something. I’m always keen to talk to you.

For now, though, I will leave you with the good news that the Kickstarter for Ancient History Magazine has so far received a little over €8,000 in pledges. If you want us to publish the magazine and you haven’t pledged so far, please consider heading to the Kickstarter page and pledge some money. You can help us with as little as €5, and €10 will get you the first issue of the new magazine delivered right to your doorstep. Thanks!