A few months ago, I visited the Carthage exhibition at the National Museum of Antiquities here in Leiden (which is now closed till December as they remodel). I’ve already posted about a beautiful stela that I saw there with a relief of the god Melqart. Among the other objects in the exhibition was this striking bronze statuette of a drunk Hercules, dated to the second century AD: 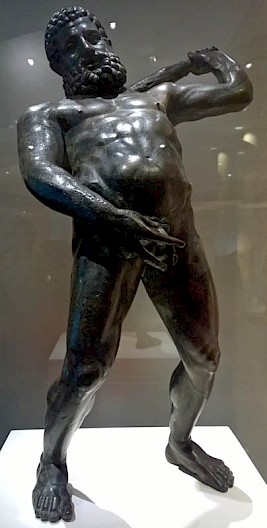 The Greeks and Romans identified Hercules (Heracles) with the Phoenician Melqart. Statues depicting a drunken Hercules urinating were fairly common in the Roman period and are, unsurprisingly, referred to as Hercules mingens (‘Hercules pees’).

In art-historical terms, this statuette fits with artistic and consumer interests of the Hellenistic period and afterwards. In Classical Greek art, the human body was often idealized, but from the later fourth century BC onwards, artists turned toward depicting people who did not fit the Classical ideal: the elderly, the (very) young, the drunk, the misshapen, the wounded and tired (such as the famous ‘Boxer at Rest’), and the strange (I don’t know of any representation of a hermaphrodite that predates the Hellenistic period, for example).

Hercules, the strongest and foremost of all ancient heroes, not only suffered great misfortune, but also greatly enjoyed life whenever possible. Since Hercules was a man of great appetites and little restraint, it should not surprise us that he had no difficulty in becoming inebriated and then needed to relieve himself in the dramatic manner depicted in this bronze statuette. (Indeed, urinating drunkards are already depicting on Attic red-figure cups of the fifth century BC.)

And this, too, is ancient history.