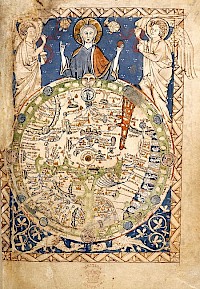 If you would have asked a Medieval scholar where history had begun, he would have said something like “Why? In the Garden of Eden of course. Somewhere in the East. After that, the ancients lived in the land of Shinar. There was some confusion of languages, so the various nations migrated to the other parts of the world. Take Abraham, who went from Ur to Harran to the land of Israël. The book of Genesis clearly says so.”

The author of Genesis was not the only one to believe that history started in what is now Iraq. The Assyrians, Babylonians, Elamites, Akkadians, and Sumerians believed it as well. At the dawn of history, shortly after the gods had created humankind, the Seven Sages had come from the sea, and had explained to the first humans how to cultivate the land, build cities, establish justice, serve the gods, rule as kings.

When you read the Greek authors, you will find a similar recognition that the ancient civilizations of the Near East had invented many things centuries before the Greeks. The alphabet came from Phoenicia, Herodotus knew, and the gods had been discovered by the Egyptians. About Pythagoras, it was said that he had found his wisdom in Egypt and Babylonia. Plato found a way to claim at least some cultural superiority for Greece: what the others had done, the Greeks did better.

Still, even in the Roman age, the Greeks accepted that cultural priority belonged to the Near East. The entertainers known as “sophists” (we ought to translate it as “concert orators”) were proverbially proud of their classical Greek heritage, but still, when a sophist named Hadrian of Tyre for the first time addressed the Athenians, he started his speech with the words that “Again, letters have come from Phoenicia”. Hadrian and his snobbish audience may have liked to see things differently, but had to admit that Greece owed much to the East.

Let’s jump to the Early Renaissance, when scholars for the first time had a different focus: it was Rome that mattered. The great Italian architects took inspiration from Rome, although they knew the Greek temples of Paestum and Sicily. Jurists explicitly stated that Graece non legitur: Greek interpretations of Roman Law did not matter. Writers followed Livy, Virgil and Seneca. When the French scholar Jean Mabillon visited Italy, he met scholars who studied Greek; when his pupil Bernard de Montfaucon made the same journey, he did not meet hellenists.

By the second half of the eighteenth century, all had changed. The German scholar Winckelmann had proclaimed that all art had come from Greece. Unlike the nations of the Near East, the Greeks had been free, and this had created great thinkers, great philosophers, and great artists. This interpretation of the distant past perfectly matched the age of Enlightenment: it offered an alternative for the old, Biblical image that civilization had come from the East. It also fitted European liberalism and was incredibly popular.

The rise of archaeology has changed all that. Today, few people will say that civilization – however we define it – started on one point. Egypt, Iraq, Central Europe, Judaea, Persia, Greece, and Rome all contributed. This is currently the standard view of the origin of civilization.

An even more radical view is possible. After all, we see how artistic innovations spread through Central Asia from China and India to the West, and even though we have no written sources to prove it, we can consider that ideas must have spread as well. We can imagine, as Christopher Beckwith proposes, that the civilizations that were once considered the centers of civilization, in fact were the urban periphery of a connecting culture of nomadic traders, which at various moments in history was called Scythian, Hunnic, Turkish, or Mongol.

Personally, I find Beckwith’s theory hard to believe, and I agree with Josho and Jasper that Ancient History Magazine should stick to the standard view I mentioned above. Still, it is good to know that it is only one view among many. It is also good to know that all these views are quite subjective, the products of brilliant minds.

This is why I want to write about some of those brilliant minds: about Scaliger, about the great antiquarians, about Montesquieu, about Winckelmann, about Gibbon, about Wolf… the whole bunch of them. If I may paraphrase Bernard of Chartres, one of those Medieval scholars I referred to in the first section: we are standing on the shoulders of giants.