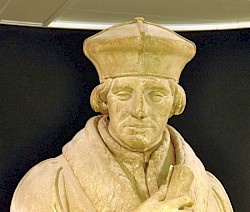 Yesterday, I discussed how Poliziano discovered the principles of textual criticism . In other words, he found out how scholars might reconstruct texts of ancient authors. Establishing the tradition, however, is just a first step.

Take, for example, the manuscripts of Arrian’s Anabasis , his book about the campaigns of Alexander the Great. In some copies, we read about a Babylonian canal named Pollakopas  ; in other copies, it’s called Pollakottas . As it happens, the solution is simple, because a Pallukkatu -canal is known from cuneiform sources, which means that Pollakopas is wrong. Probably, a scribe read π instead of ττ . A critical edition of the Anabasis will therefore opt for Pollakottas .

Still, we cannot entirely ignore Pollakopas  : after all, we’re not interested in what Arrian should have written but want to know what he actually wrote. We cannot exclude the possibility that he himself was responsible for the error, which may have been corrected by a good scribe. Both words are therefore important and a critical edition will have a footnote with the ineliminable variants that the editor has decided not to use. These footnotes are called an ‘apparatus criticus’ and look like a cloud of abbreviations. (The picture shows the first lines of the Gospel of John in the Nestle-Aland edition.) 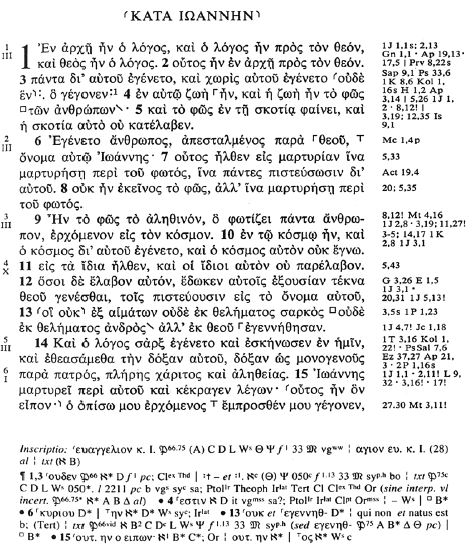 An apparatus criticus allows a scholar to be as transparent as possible. He may have his preferences, but shows the alternatives. He just presents an ancient text.

This may seem quite normal, but back then, it wasn’t. Imagine a critical edition of the Gospel of Luke , in which Christ says to one of the men who is crucified with him that “I say to you: today you will be with me in Paradise”. This is inconsistent with Roman-Catholic theology, in which a sinner would have to spend some time first in Purgatory. You can imagine that Catholic scholars preferred a variant such as “today I say to you: you will be with me in Paradise”, which solved a theological problem.

The man who prepared a neutral critical edition of the New Testament was Erasmus of Rotterdam (1466-1536). His edition consists of two parts: the text of the Latin translation that was used in the church and a Greek original, which Erasmus decided to add to show that the Latin version was accurate. Published in 1516 and reprinted in 1519, this edition appeared in the very years in which Luther started the Reformation, but both Luther and his supporters and their Catholic opponents used the Bible of Erasmus, who had tried to make a philologically accurate edition and had refrained from trying to be theologically accurate.

Erasmus also introduced a rule of the thumb that is known as lectio difficilior potior , “the reading that is more difficult is to be preferred”. He had discovered that copyists would sooner make difficult sections easier than make simple sections more complex, and this meant that if one had to choose, the more difficult version was likely to be authentic.

So much for today. This article and the three preceding ones are the beginning of a series on the scholars who laid the foundations of the study of Antiquity. I will continue this series later. The next weeks will be used to show how Ancient History Magazine will treat the themes that will be central in its issues. Josho and I will blog seven times on ‘time’, trying to show both oriental and classical perspectives, and seven times on ‘Cyrenaica’, using both philological and archaeological evidence.