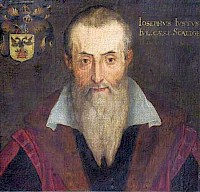 Two weeks ago, I blogged about Nanni of Viterbo (1437-1502), the man who claimed to have rediscovered several ancient texts that confirmed what the bible told about the ancient history of the Jews. His books stimulated a lot of debate. Among those who believed that the texts were genuine, was Martin Luther, but others were more skeptical. They turned out to be right, but it took almost a century until this was accepted.

Of course, it was a bit suspicious that Nanni had discovered so many texts, but in itself that was not an argument that every text was fake. The fact that each text confirmed the biblical account was not decisive either, because few doubted that the biblical account was true. But what to think of the words of ‘Berossus’ that the ten lost tribes of Israel had migrated to Spain, the home country of Pope Alexander VI? What to make of the claim that Noah, calling himself Janus, had been king of Italy? Was it really possible that Osiris had been a king, not a deity, and that the first capital of the world had been Nanni’s own hometown Viterbo?

Today, we immediately recognize that these statements are ridiculous, but back then, things were not so clear. The discovery of Greek or Latin texts was certainly not unheard of. Hieroglyphic and cuneiform texts were still illegible and no one had bothered to systematically collect and study inscriptions or coins. In fact, the debate about Nanni’s texts was a major incentive for the study of these two types of evidence.

Still, there were a couple of blatant errors. One of these was that ‘Berossus’ mentioned the founding of Lyons. Nanni’s detractors pointed out that the city had been founded in 43 BC by Lucius Munatius Plancus: 210 years after the death of Berossus.

Chronology was probably the most important clue that Nanni’s books were fakes. The biblical book of Daniel contains a complex chronological system, which the scholars of the fifteenth and the sixteenth centuries tried to understand, as it seemed to suggest a date for the Second Coming of Christ. Scholars like the Swiss Orientalist and linguist Theodor Buchmann (‘Bibliander’, 1509-1564) were happy to use Nanni’s books as additional source of information and claimed to have discovered complex patterns in world history. Even scholars who did not believe in those patterns, like Heinrich Bullinger (1504-1575), appreciated Nanni. Still, the first seeds of doubt had been sown. There were just too many inconsistencies between Nanni’s texts and the other ancient sources.

Buchmann and Bullinger were Protestants. Catholic scholars were also interested in ancient chronology: in 1582, Pope Gregory XIII introduced the calendar that is still named after him. Again, inconsistencies were found, this time between the chronology of Nanni and the astronomical chronology. In the end, Nanni’s books were recognized as hoaxes.

This may look like a dusty, boring debate, but the consequences were profound. The French-Dutch classicist Joseph Justus Scaliger (1540-1609), who wrote several books on ancient chronology, was not interested in patterns but just wanted to understand the sequence of the events of ancient history. To the Graeco-Roman chronology, which had until then been used to corroborate biblical chronology, he added Egyptian and Babylonian information, which he found in the texts of Berossus and Manetho (the real ones, not the hoaxes of Nanni).

For the first time, the real depth of history had been fathomed. Although Scaliger’s reconstructions were not perfect, a more or less reliable chonological framework had been created. We now take this to be self-evident, but it was a giant leap forward.

One of Scaliger’s conclusions, however, was even more important: biblical chronology had to be taken with a pinch of salt. His remarks that the bible is infallible in religious matters, but can contain errors on other subjects, were known to Galileo, who wrote similar things in his famous Letter to the Grand Duchess Christina. It was the first step towards a new way of thinking, in which the bible was no longer recognized as an exceptional authority. It is not much of an exaggeration to claim that Scaliger stands at the root of Enlightenment.