How were ancient Greek pots made?

Since 2006, I’ve taught a lot of courses on a variety of subjects at different institutions geared at adult education. I usually try to organize a tour in an archaeological museum as part of these courses, especially when they are on Classical art and architecture. When you visit the Greek department of virtually any archaeological museum, you’ll spend a considerable amount of time looking at Greek vases.

I always get a lot of questions about those pots. How did the ancient Greeks make them? What’s the decoration made of? Did they use some kind of paint for those figures? How did they get those black surfaces so dark and shiny? Who made those pots? What were they used for? Who bought them? And so on. All important questions that most museums usually only touch upon (if you’re lucky), since Greek painted vases are primarily seen as art rather than objects of everyday use.

There’s a lot to write about when it comes to ancient pots, including the important difference between the nicely decorated tableware and the coarser cooking wares (which are often not displayed in museums!), and how painted pottery was regarded in ancient times. Those are all issues for future blog posts, starting next week. For now, though, I want to focus more particularly on the first of the questions raised above, namely how the ancient Greeks actually made their pots.

From the Neolithic onwards, the Greeks made pots in different styles. For this blog post, I will focus on what are perhaps the most characteristic styles of Greek pottery, namely black figure and red figure. If you need a refresher, here’s an example of an Attic black-figure vase, a famous amphora made by Exekias and depicting Ajax and Achilles playing a game (source): 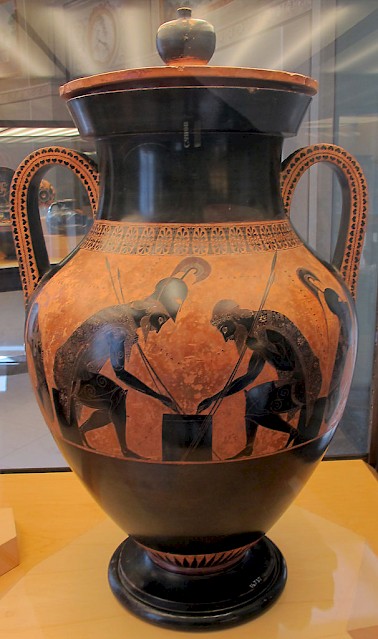 In black-figure, the figures are painted using a clay slip that becomes black through firing, with details added through incision. Red-figure is the reverse: the backgrounds are filled in, but the figures left blank, with details added using fine brushes. Red-figure technique developed ca. 525 BC and eventually displaced the older black-figure technique.

These pots served a function similar to fine china: they were used during meals and feasts. The general assumption is that pots like these were the crockery of the rich, but there is some debate on this; indeed, the upper echelons of society probably used metal vessels, and it has been suggested that black- and red-figure pottery was modelled largely after vessels made from silver. Indeed, the polished, all-black pottery that came in vogue in Athens in the Classical period was almost certainly intended to emulate silver vessels.

The clay (keramos) used for such pots was of a very high quality, relatively fine and pure. The potter threw the clay on the potter’s wheel, where the basic shape would be formed, with thin walls. The Greek potters’ wheel was low to the ground and spun round by an assistant. In comparison, cooking pots and large but simple storage vessels were often shaped by hand (not using the wheel, though there was a great amount of variety), were made from coarse clay, and had thick walls. When the basic shape was modelled, handles and other elements were added. The pot could be polished using a damp cloth to smoothen the surface.

The kind of clay that the Greeks used was secondary clay, i.e. clay that has been transported from its original source by rivers and rain, and deposited. As it is transported, the clay accretes other materials, most notably iron. It is the iron content in the clay that gives Greek pottery its colour. Attic clay contains quite a lot of iron, which explains its rich red colour. Corinthian clay, for example, was more cream-coloured.

In order to ‘paint’ the vase, the Greeks used a very fine clay slip made from the same clay as the pot itself. Ferric oxide is red in colour, but when fired in an environment with little oxygen (i.e. a reducing environment) it turns into ferrous oxide and magnetite, which are black in colour. Attic pottery was fired in three stages: an oxidising phase (during which clay and slip turned red), a reducing phase (that would have turned the clay slip black and hardened it), and finally another oxidising phase to finish the procedure.

The temperature in the kiln never exceeded 950 degree Celsius, which explains the relative ‘softness’ of Greek pottery compared to modern china. Still, this fine tableware was usually fired at a much higher temperature than – generally speaking – everyday cooking wares and the like. You can even hear the difference: if you drop a shard of an Attic red-figure vase on the table, it will ring, whereas a shard from a normal, coarse cooking pot tends to sound dull when you drop it on a hard surface (as a more or less general rule; again, there is plenty of variation, and cooking wares were sometimes fired at high temperatures, too!).

The process is simple on the surface, yet requires a great deal of knowledge and experience to pull off successfully. The Antiquities Museum in Leiden, for example, had a couple of Attic red-figure vases on display that were misfires: parts of the pots had turned a uniform, dull grey instead of the stark red/black contrast.

Edit: my thanks to Prof. Vladimir Stissi of the University of Amsterdam, who pointed out a few things that needed to be clarified/nuanced a bit.