Some time ago, Valley Games re-released The Republic of Rome. In the mid-1990s, we used to play this extremely complex board game for hours and hours, usually starting at noon and continuing until ten o’ clock, only interrupted when the pizza man arrived. We would have liked to continue after ten, but the first bottles of beer were usually open at four, and at ten, we were too tired. Usually, we reconvened next week, and another week. But even after three weeks, thirty hours of game play, eighteen pizzas, and countless beers, we usually had no winner.

Perhaps, we lacked the ruthless determination that was necessary to win. Playing was too much fun – why spoil it by winning?

The Republic of Rome is about six factions of senators trying to make one of their members the first man in Rome. You have to negotiate with other factions (but are not obliged to keep your promises) to obtain the consulship, fight wars, and gain influence. But having won a war, you have to create a province, which means that someone has to become governor; and this someone is not in Rome, which changes the number of votes and the balance of power. On the other hand, when you are in a province, you are able to improve it, and gain additional influence.

In the first phase, you don’t have to think about eliminating a fellow player, because the enemies of Rome are too dangerous. The Punic Wars are difficult, especially when the Hannibal card is on the table. The Roman who defeats this opponent, will immediately be excluded from any further office, more or less like happened to the real Scipio Africanus. Ignoring the war, on the other hand, is impossible, because “the game will win” and all players lose.

It is only in the second phase, when the main enemies have been eliminated, that the power struggle between the factions can start. As I said, perhaps we never properly learned this part of the game. We were too amazed about its realism: it could be pretty nasty when Spartacus was in the neighborhood, evil omens prevented an attack, and one of your fellow players was known to contemplate marching on Rome. Fortunately, there is always the possibility of introducing a landbill, while persecuting an opponent is also an option. Cilician Pirates, exploding Vesuvii, manpower shortage, slave revolts… it’s all there, just like tribunes, consuls, an occasional dictator, his master of horse, and the pontifex maximus. 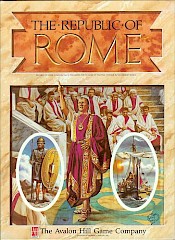 What made these evenings so special? In the first place, the complexity of the game. Monopoly becomes boring because it is simple and yet lasts pretty long. Settlers of Catan is also simple, but remains nice because it is finished in an hour or so. The makers of The Republic of Rome chose to make a game as complex and realistic as possible. You understand why the pontifex maximus mattered, why you have to organize games, why it’s dangerous to revoke a landbill. The course of the game always remains surprisingly close to reality, and this makes it a useful teaching tool as well. But most of all, it is a good game: you have to have some luck (it’s quite frustrating to see your fleet sink in a storm after you’ve just won a naval battle and are ready to invade Africa), but you are challenged to use your brains too.

In the second place, good company. By chance, we had a nucleus of four men, twenty-something, who liked the game, and some others who would join more or less irregularly. As things go, we developed a jargon of our own. The mortality chits were drawn by the “hand of death”; the player of the Julius Caesar card would inevitably be saluted with cries that Julius had to die; and so on. We just had great fun.

The key to successful gaming was, of course, the willingness to read the seventeen pages of the rules. The first afternoons/evenings, you will be absolutely shocked, and wonder how you can possibly ever master all rules. But you will learn. We benefited from an excerpt of the rules, printed on big paper sheets, that we attached to the wall.

It’s good to know that the game, which has been out of print for quite some time, is now available again.