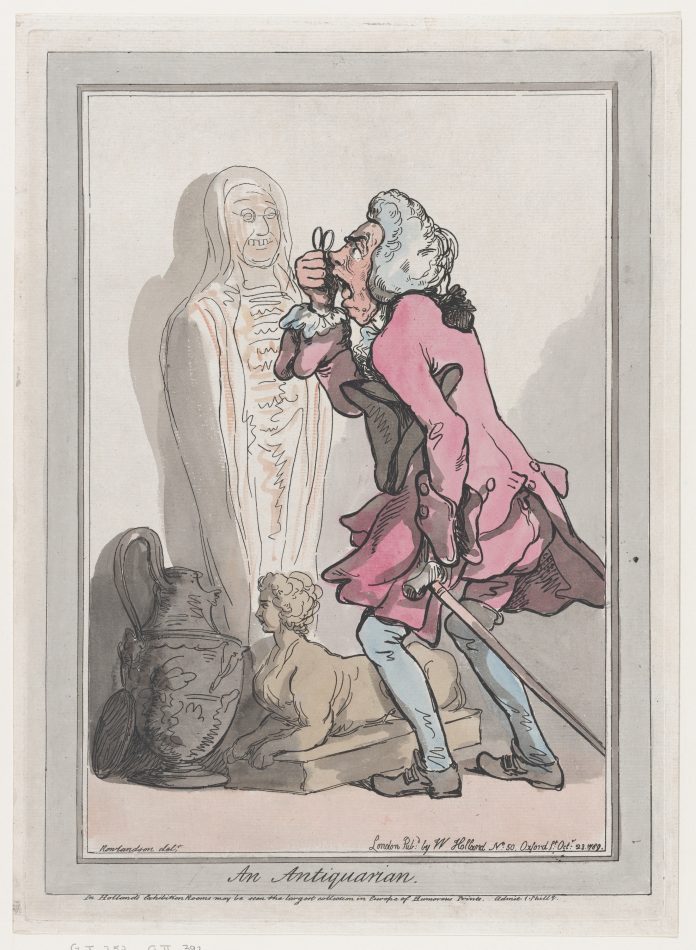 An Antiquarian, by Frederick George Byron (1789). Metropolitan Museum of Art
When thinking about the Classics, old junk and grey men come to mind, and there might be some truth to that. After all, this field was shaped in the nineteenth century and still bears some traces of that time period. While archaeologists of the twentieth century were constantly innovating their field, the classicists took it a bit easier. At present, however, they are now being catapulted into the twenty-first century. Traditionally, the field of Philology is divided into two sub-areas. The first concerns itself with the establishment of the precise text, including papyrology (for texts written in Antiquity), but also the study of medieval manuscripts. The second subarea is concerned with the explanation of these texts, which contains both a linguistic and a literary aspect. All of these are currently undergoing changes as digital techniques have made it possible to overcome the limitations of the human mind and extract more information from ancient manuscripts. So we will get better editions of the texts. Explanations will also change, After all, the DNA revolution has removed the hermeneutical horizon, thus releasing a wealth of comparable material. Scholars will have more data than ever. This also sets a new task: how to separate sensible and nonsensical comparisons in new ways Inscriptions are a special kind of text. Just like clay tablets, they were quite laborious to make, and so their creators used abbreviations and stereotyped phrases. For example, a Roman inscription can commence with the formula IMP CAES AUG M AUR ANTON which translates to Imperator Caesar Augustus Marcus Aurelius Antoninus. These abbreviations and formulas are quickly mastered and one also learns how to fill in certain gaps.

Nowadays, one can even teach a computer to recognize these patterns, and this is exactly what is currently taking place.  The name of the computer program is Ithaca and it was recently presented by researchers Thea Sommerschield and Yannis Assael in an article in the magazine Nature (open access). The aim of Ithaca is threefold: to date inscriptions more accurately, to establish their provenance and to fill in the gaps. Or perhaps we should say: dating more accurately without prejudice, independently establishing the provenance, and filling in the gaps with an open mind. After all, ancient historians are eager to opt for a certain outcome for these gaps, and so unbiasedness is crucial. The above-mentioned computer program can be taught to formulate hypotheses, which are then checked by humans in terms of plausibility, resulting in a program that has learnt how to formulate more accurate hypotheses. To that end, Ithaca has been equipped with a database that contains over 178,000 inscriptions and a list of Greek personal names (LGPN) which helps to determine the origin of an inscription. A name such as Stratonike for example is more likely to occur in Syria rather than Sicily, while the spelling of Berenike indicates a different region than Ferenike.

The images below (copied from the above-mentioned article) together form a test result. The inscription is known as IG II² 116 with its missing letters indicated in grey. 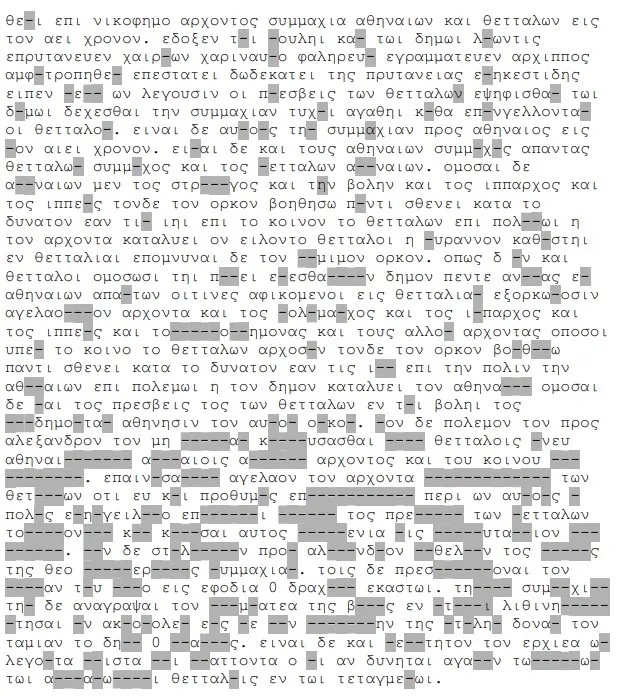 In the image below one can see how Robin Osborne and P.J. Rhodes have reconstructed the text with an outcome that gives little reason to doubt. 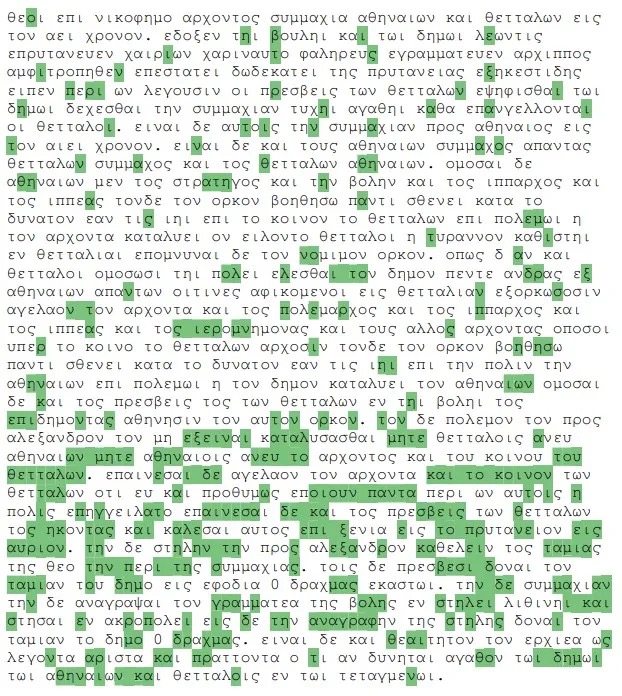 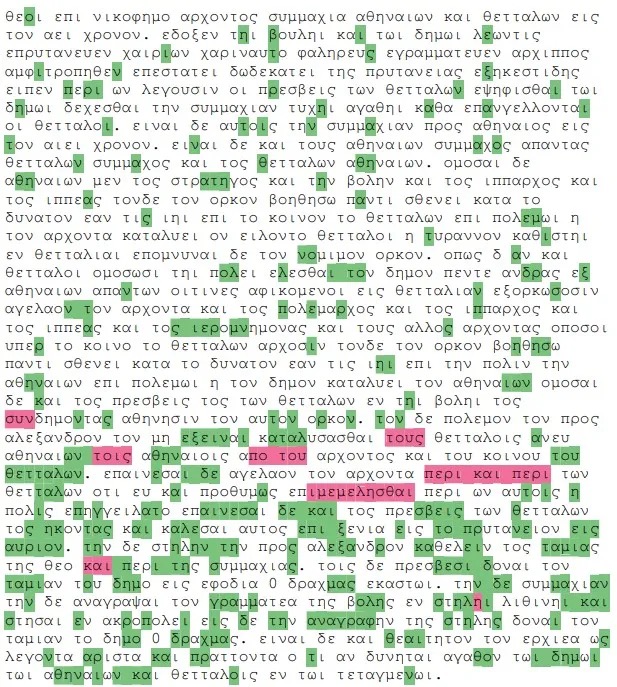 The researchers will be the first to acknowledge that they are not quite there yet. The program does not replace people, but rather serves as a tool to aid human work. While building this tool, the researchers claim to be on the right track. In time, the computer program may be able to reconstruct texts faster than the human mind, simply because it can remember more things at once. But the final verdict will, presumably, remain up to a human.

A final example illustrates the potential of this program. Athenian inscriptions are known for a certain dating problem namely: the transition from the old to the new letter sigma. For a long time it was thought that if the sigma looked like a ᛋ,  the text containing this letter was written roughly before 445 BC. Texts in which only the Σ was used subsequently dated after 445 BC. Over the past decade, however, it has become clear that this is not true, and the dating of several inscriptions before 445 BC is under discussion.

We excluded these texts from the dataset and trained Ithaca on all of the remaining inscriptions. Notably, Ithaca’s predictions for these held-out texts independently align with the most recent dating breakthroughs, therefore overturning the conventional historical reading based on the sigma dating criterion.

Further analysis has confirmed what was recently suggested, namely that those inscriptions are younger. However, this has implications for our understanding of how the Athenian empire (re: the Delian League) functioned. The decision to hold a trial in Athens for certain lawsuits in either the 460s - when the Delian League was relatively new - or in the 420s, - as a military measure during the Archidamian War (the name of the first part of the Peloponnesian War), - can make all the difference, and so accurate dating is truly relevant. As Emmanuel Le Roy Ladurie said back in the 1980s; the humanities of the future will either be computer-based or will cease to exist. That might be a bit too one-sided. But something is changing, improving. Perhaps what we now need is a classicist to write a book on how an increased understanding of the material aspect of texts leads to more data, and how that, in turn, leads to a better understanding of the text itself.