Oldest shipwreck in the world discovered in Black Sea! 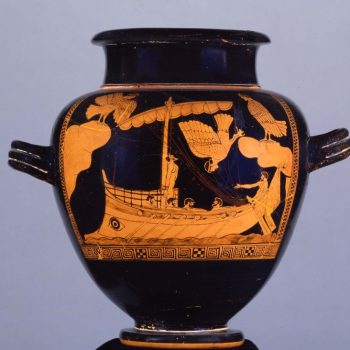 The Siren Vase. A red-figured jar depicting Odysseus and the Sirens. ©The Trustees of the British Museum.

The exciting ancient discoveries just keep on coming! This week, the Black Sea Maritime Archaeology Project (MAP) unveiled that one of the ships they discovered in the Black Sea has been dated to 500 BC, making it the oldest complete shipwreck ever found.

The project has been running for over three years, and has uncovered more than 60 shipwrecks during their exploration of the Black Sea. While other ships of this era would have disintegrated, this particular ship was able to remain relatively intact for 2,400 years because it was buried under 2 km of sea water where a lack of oxygen saved it from the ravages of time. The ship is 75ft (23m) long and closely resembles ships depicted in ancient Greek pottery, such as the famous 'Siren Vase', now housed at the British Museum. The red-figured stamnos jar depicts Odysseus and the sirens, with the Greek hero attached to the mast of a ship. While archeologists have opted to leave the wreck in its murky underwater grave (as moving it could damage the vessel), researchers were able to accurately determine its age with a small piece that had been extracted for carbon dating.

This is an incredibly important discovery. It will give us valuable insights into how these ships were built, and a better understanding of how they were used in the ancient world. The findings will be presented shortly at at the Wellcome Collection in London as part of the Black Sea Maritime Archaeology Expedition conference.