While Halloween is firmly behind us and stores have already started regaling us with Christmas muzak and decorations, November, it should be remembered, is still a month that is connected to the celebration of death. All Saints Day (November 1st), and All Souls Day (November 2nd), pay homage to those who have passed before us, with Christian observances in churches, and visits to cemeteries to honour the dead. Mexico’s famous Day of the Dead, a far less sombre commemoration, celebrates the passing of loved ones with colourful offerings of food, prayer, and poetry. In both traditions, it is a time when the liminal barrier between the living and the dead is weakened, and ghosts and otherworldly denizens are invited to visit us.

When we think of ghosts, we traditionally assume that they are a medieval Christian invention; heaven and hell, and everything in-between, but a recent talk hosted by the British Museum with Medievalist Dr. Janina Ramirez and Assyriologist Dr. Irving Finkel, aptly entitled,"The First Ghosts: a spooky evening with Irving Finkel and Janina Ramirez", shows us that ghost were "alive" and well as far back as Babylonian times. Timed to coincide with the upcoming release of Dr. Finkel’s book with Hodder & Stoughton, The First Ghosts, Ramirez conducted a fun and lively interview with Finkel on the true beginnings of our belief in ghosts, demons, and spirits. 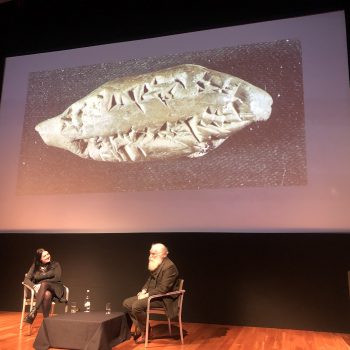 "Do not keep appearing to me!" is written on this cuneiform tablet, a stern admonishment to a ghost to stop pestering the living. ©Sandra Alvarez

According to Dr. Finkel, the only difference between our perceptions of ghosts now and perceptions in ancient times, was that the Babylonians treated them as mundanities and took them for granted. Finkel noted that there were many cuneiform texts about ghosts, some containing spells to protect one from them. To the ancient Babylonians, ghosts were considered something of a nuisance that had to be dealt with – like having mice in the house. Finkel pointed out the discovery of cuneiform tablets that were used to deal with nuisance ghosts, or use them for benefit, such as one that purports to raise a ghost so that it could tell the future. In fact, Neo-Assyrian king Ashurbanipal used a necromancer to ask his dead grandmother if he would be king! Necromancy and exorcists were quite popular in ancient Babylonia.

Ancient Babylonians also believed that ghosts retained their mortal personalities - if you were evil when you were alive, you were evil when you became a ghost. Much like modern ghosts, ancient ones also haunted the places where they once lived. This was especially true in ancient Babylon due to the fact that the dead were not kept in separate cemeteries, but buried under one’s house in a special chamber. Given the proximity of the dead, seeing ghosts was not particularly frightening to the ancients, but one speaking to you was! 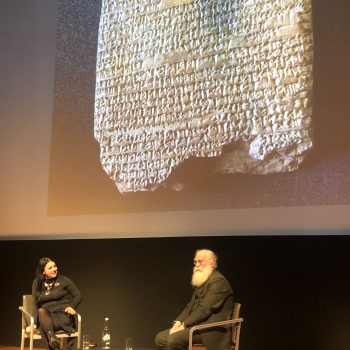 Dr. Janina Ramirez and Dr. Irving Finkel discuss this cuneiform tablet with detailed instructions on how to raise a ghost! ©Sandra Alvarez

When did the belief in ghosts begin? Finkel suggested that our belief in the supernatural goes well back to the first time that humans began burying people with grave goods. This activity suggests that culturally, they believed that while the body stayed in the ground, something else, perhaps a spirit, came out. According to Finkel, grave goods indicate some kind of acceptance of afterlife - why else would objects be placed beside a corpse to rot? In Mesopotamia, there was the belief that in order for a baby to be born, someone had to die – the cycle of life and death – and this persisted into later religions, such as Judaism and Christianity.

Whether one chooses to believe in ghosts or not, we can say with certainty that ghosts were not "newer" medieval inventions that solely coincided with the rise of Christianity. The belief in otherworldly spirits has been around for thousands of years, dating back to when our earliest human ancestors began burying their dead with grave goods. First Ghosts provided a better understanding of how pre-Christian cultures explained the unexplainable,  and added an exciting new chapter to the debate about the supernatural, and our first encounters with spirits.

For more information about lectures at the British Museum, please visit:

The British Museum – What's On