Headdress with mythical feline heads. (800–550 BC). ©Photo by Sandra Alvarez[/caption] The British Museum has just launched an exciting new exhibition, Peru: a journey in time that looks at various Andean cultures beginning in 2500 BC right up to the sixteenth century and the arrival of European colonizers. If you're looking for something to do while in London over the holidays, this is a must-see addition to your itinerary. Peru: a journey in time faced many obstacles before finally being able to open tomorrow. The curators encountered delays and extra barriers when trying to bring over objects from Peru during the height of the Pandemic. In spite of these difficulties, they managed to collaborate with 9 institutions to bring over 40 unique objects that have never before been seen in the UK. The British Museum is also proud to include 80 items from its own collection of Peruvian artifacts in the exhibition.

Curators Jago Cooper, Head of the Americas Section at the British Museum, and Cecilia Pardo-Grau Project Curator for the Americas Section at the British Museum spoke about the difficulty of trying to cram 3500 years of history into one exhibition. Cooper said, "It feels a little bit like trying to tell the story of Europe and European history, 3500 years in just one exhibition, which is an impossible task". Instead of attempting an overwhelming display, they decided to focus on two overarching themes: time and environment. They felt that this was the best way to have a strong narrative while providing the best possible comprehensive exhibition. [caption id="attachment_71776" align="aligncenter" width="662"] 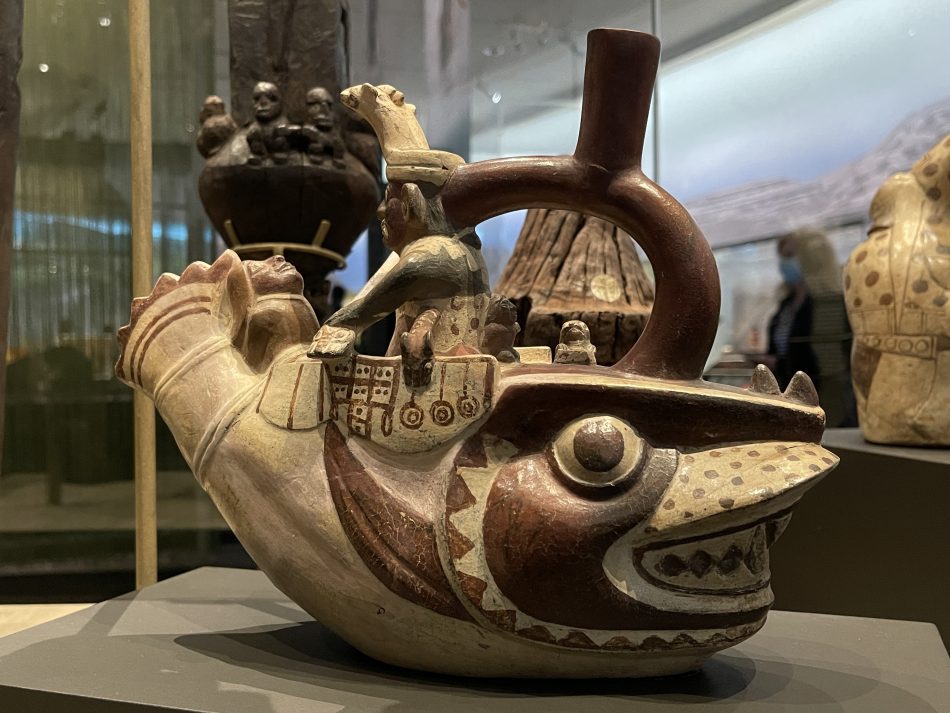 Prisoners being taken by boat for sacrifice. (AD 100–600) ©Photo by Sandra Alvarez[/caption] Time was selected because of the way ancient peoples of this region conceptualized it – they had an entirely different perception of time from our Western one. Cooper explained that, 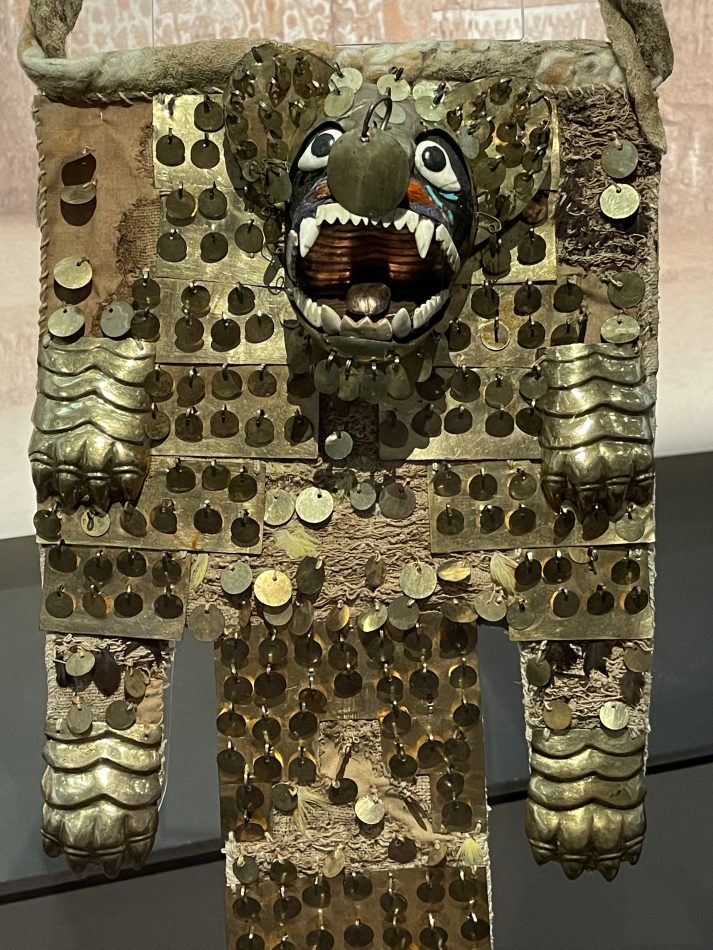 Moche Ritual Cape (AD 200–600). This would have been worn by an important member of the community during a special ceremony. ©Photo by Sandra Alvarez[/caption] So while visitors will naturally move around the exhibition in a chronological fashion, they will also notice what Cooper called, "these cross-temporal moments showing you the thematic and ideological connections and value systems of the Andes from the deep past right up to the present." The idea was to have visitors immerse themselves in this perception of time where the past is not set in stone and the present and future have been reimagined. Pardo-Grau discussed Peru's challenging environment. The country contains one of the most arid deserts in the world while also being located next to one of the richest oceans. These two diverse environments provide an interesting framework for examining how people lived in, and navigated, this kind of terrain in their day-to-day lives. They also contextualized the objects in the exhibition to demonstrate how the artifacts tell the stories of various ancient Andean cultures within this oppositional environment.

There are some must-see pieces in this collection. A few standouts are the gold earplates and headdress from the burial of a 40-year old man, dating from 550–800BC. There is also a stunning Moche ritual cape (AD 200–600) replete with a fearsome feline face and golden paws. However, my favorite pieces (due to my penchant for all things macabre) were the statues of defeated Moche warriors and prisoners. The Moche would hold ritual battles and the losers would have a rope tied around their necks, be stripped of all their clothes, and marched off to a ceremonial space where they would be sacrificed by priests. The Moche believed that blood offerings kept the peace between the gods and men and that it also ensured their overall wellbeing. [caption id="attachment_71778" align="alignleft" width="287"]

The exhibition examines the cultures of the Chavin, Nasca, and Moche - people who adapted to the harsh landscape of desert, mountain, and jungle and made their home there. The exhibition takes a look at religious beliefs, such as mountain spirits and symbolic animals that represented the sky, earth, and the underworld; the remarkable geoglyphs and the grim reality of human sacrifice. It also looks at the importance of textiles, music, and food production. The overall goal of the exhibition was to tell visitors about Peru's overlooked ancient peoples and not just focus on the last 150 years when the Incans built their empire – the usual history that everyone already knows. A good chunk of this exhibition is devoted to the ancient period and the early development of Andean cultures. People migrated to this part of the world over 15,000 years ago and we finally get the chance to hear those voices. The curators wanted to showcase the lesser-known narratives of this important geographical region and to that effect, they achieved their goal with this marvelous exhibition. Peru: a journey in time runs from November 11 2021, to February 20, 2022. For more information, and to purchase your tickets, please click here.