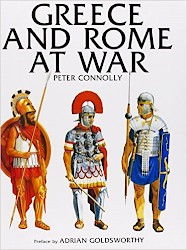 taught me English. It must have been 1978 when I found his book The Roman Army in the public library in Apeldoorn, the Dutch town where I grew up. I was fourteen years old and had had my first English lessons, but reading a book in a foreign language was beyond what I was accustomed. Still, it was the only way to learn what Mr Connolly had to tell, so I set out to translate it, armed with a dictionary.

That was something I really needed, because these were not the words I had been taught at school. What on earth was a shield boss? What was an outrigger? A javelin? (I still don’t know how to pronounce that word.) Oh yes, I wrestled with Connolly’s words but it was worth the effort. I now recognize a clever teacher, who used the upper part of his pages to tell the exciting stories of the battles of Pydna, Julius Caesar, and the crisis of the year 69 to attract the readers’ attention, and explained the details on the lower part of the pages, with many illustrations.

Those illustrations! If he had to explain what a Roman shield looked like, he would add a drawing of the monument of Aemilius Paullus in Delphi, which explained it all (shield boss included). There were good graphics of, say, a legion’s subunits an manipular tactics. And there was some real artwork, like the siege of Jerusalem.

Later, I discovered that Connolly had written another book about The Greek Armies, which had the same structure, and a book about Hannibal and the Enemies of Rome, which was less focused on one theme – it also discussed the Etruscans – but was the most interesting of the trilogy. I am currently preparing Ancient History Magazine 6, which will be devoted to fifth-century Rome, and I would not be surprised if drawings of Connolly’s Etruscans and Samnites appear before my mind’s eye.

It’s amazing how much I’ve been influenced by those books. In early 1992, I cycled to Italy and Greece, using the Montegenèvre Pass because Connolly had said that this had been Hannibal’s route across the Alps. It’s always a surprise when I recognize an object in a museum that I’ve seen in one of Connolly’s books: that charming, painted dish with that war elephant and its young (now in the Villa Giulia); the altar of Domitius Ahenobarbus in the Louvre; the Dendra panoply in the museum in Nauplion.

Now that I am writing this, I suddenly realize that Connolly’s books were not just my first introduction to ancient warfare and the English language, but also to the museums with classical art. “These objects are important,” Connolly seemed to say, and he explained why: they were useful to reconstruct aspects of the past. Of course there are many other, often very beautiful and interesting museum pieces, but Connolly’s objects have, for me, remained a kind of standard.

In 1981, Connolly recycled much of his artwork in a new book, Greece and Rome at War. It had a completely new text and contained better maps and a couple of photos. It was recently reprinted by Frontline Books – and I am glad that they did so. Greece and Rome at War must remain available to engage new generations for the study of classical civilization. I was really delighted when, upon arriving at the Karwansaray office earlier this week, I found a copy of the latest, paperback edition, on my desk.

Like its sisters Ancient Warfare and Medieval Warfare, Ancient History Magazine commissions illustrations: it is the best way to explain what the ancient world looked like. In this, we are much indebted to Peter Connolly.