Rhodian and almost-Rhodian Iron Age pottery at the British Museum

The British Museum houses thousands of objects that were excavated in the middle of the nineteenth century from the ancient city of Kameiros, Rhodes. Italian-Levantine antiquarian, Sir Alfred Biliotti (1833–1915) excavated it alongside archaeologist Albert Salzmann (1824–1872) in 1863/64. The dig, funded by the British Museum, unearthed over 2,000 objects, with many of the finds coming from graves and sanctuaries. 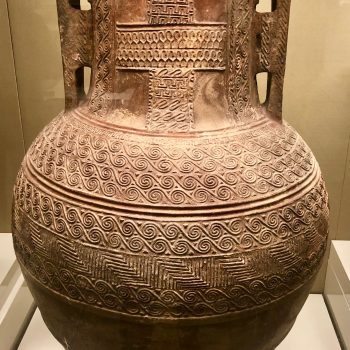 This storage jar from Rhodes was made in about 700–650 BC. Normally, such pithoi would be used for holding grains and oils, but this one, found at a grave site, served as a coffin for children or young adults. The British Museum. Photo ©Sandra Alvarez

The Iron Age Pottery of Rhodes (800–500 BC)
This talk, given by Ancient Greek and Roman curator Nicholas Salmon, looked at some of the museum’s collection of pottery from Rhodes. The Iron Age period was very important to the history of Rhodes as a lot of pottery was coming there from mainland Greece and Egypt. The island was a major stopping point for trade en route to Cyprus.

One of the largest and most unique artefacts is a pithos dating to 700–650 BC. Jars this size were normally used to store agricultural goods such as oil and grains, but one of this size, discovered in a grave, was determined to be used to bury children or  young adults. It is not decorated in the back to allow it to lie flat on the ground. This type of pottery is only found in certain parts of the Aegean, such as Crete and Rhodes. It was most likely commissioned and quite costly. 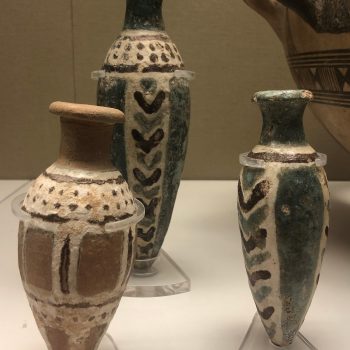 Functional or funerary?
Other interesting items in the Rhodes collection include these lovely Alabastra – perfume or oil vessels. These perfumes were made locally, and also exported to the Levantine coast. Oil was an important commodity on Rhodes. But were these items functional or decorative? Given that the vast majority of them were found in graves, it is natural to assume that they were items the deceased used in life and something that they would take with them to the afterlife.

However, this was not always the case. Objects found in Rhodian graves were often found in pairs, for example, two perfume bottles, two storage jars, etc...and in most cases, such grave assemblages showed few markings of frequent use, meaning that these were objects purchased specifically for funerary purposes. Along with these double assemblages, there were also random objects found, such as a single spoon, that did show heavy use and were functional. These graves contained a mixture of functional and symbolic artefacts. 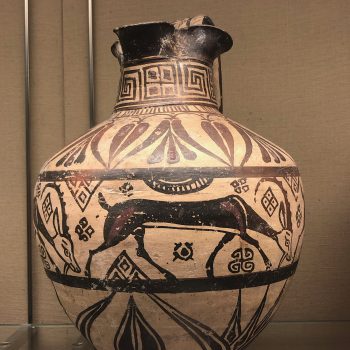 This 'wild goat style' was once incorrectly associated with Rhodian pottery. This piece actually comes from Miletos. The British Museum. Photo ©Sandra Alvarez

Rhodian or almost-Rhodian?
One of the conundrums archaeologists faced with Rhodes was determining if the items found were truly Rhodian or just found on the island but made elsewhere. There are many such samples in the British Museum where the initial impulse was to state that the artefact was definitively Rhodian, only to discover later on that it was not. Why the confusion? One of the problems was that the items were inextricably linked to Rhodes because they were not found anywhere else. Naturally, this led archaeologists to believe that items only found on the island were in turn, made on the island. The "wild goat style" pottery in the British Museum is a perfect example of this confusion. A lot of this particular style of pottery was found on Rhodes. To date, it hasn’t been found anywhere else so it was assumed to be Rhodian at the time of discovery. Over the last 20 years, scientific analysis was carried out and it turned out to actually be ancient Ionian pottery that had been exported to Rhodes. 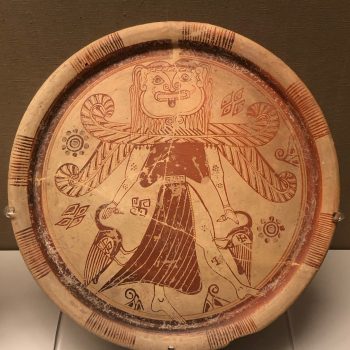 The goddess depicted is Potnia Theron, who is often shown as a winged goddess grasping animals in both hands. This plate may have been made on Rhodes, but it isn't certain. The British Museum. Photo ©Sandra Alvarez

Another example of this mistaken identity occurred with these "iconic" Rhodian plates. These plates were also only found on the island and assumed to be locally made. In the last five years, scientific investigation proved they were actually from the isle of Kos, demonstrating once again that just because something has only been found in one place, it does not mean it is automatically native to that area. In addition to this, it indicates that there appeared to be a robust local trade going on between islands. This is why it’s important to look at larger trade networks and not make assumptions based on where an object is found.

The talk provided an interesting background to some of the lesser known pieces in its Rhodes collection, and a better understanding of the problems that archaeologists encounter when undertaking excavations.

The British museum offers free talks on a wide range of topics almost every day! If you’re looking for something cheap to do in London, popping into the British Museum for one of its free guided talks is a perfect way to take in some of the artefacts in its collection that you might normally miss while strolling through the galleries. Talks are 45 minutes long and start at 13:15. Please check the British Museum’s events here for more details.

Like ancient history? Want to know more about ancient Greece?