We’re in the final phase of the layout stage for issue 8 of Ancient History magazine. Next Monday, it should be sent off to the printer’s. At the same time, issue 9, on Athens in the age of Plato, has been planned out and most of the illustrators have also been assigned. In the meantime, I’m also working on my last issue of Ancient Warfare (X.6), which will deal with the Year of Four Emperors (AD 69).

Lots of work to do, in other words, and what better way to work than to the sound of music? It brought to mind a fresco that I’ve seen in the National Archaeological Museum of Naples. Though it must have originally been fixed to the floor, the museum has most mosaics, including this one from Pompeii, framed like paintings and suspended from the wall. Here’s a photo I took of it: 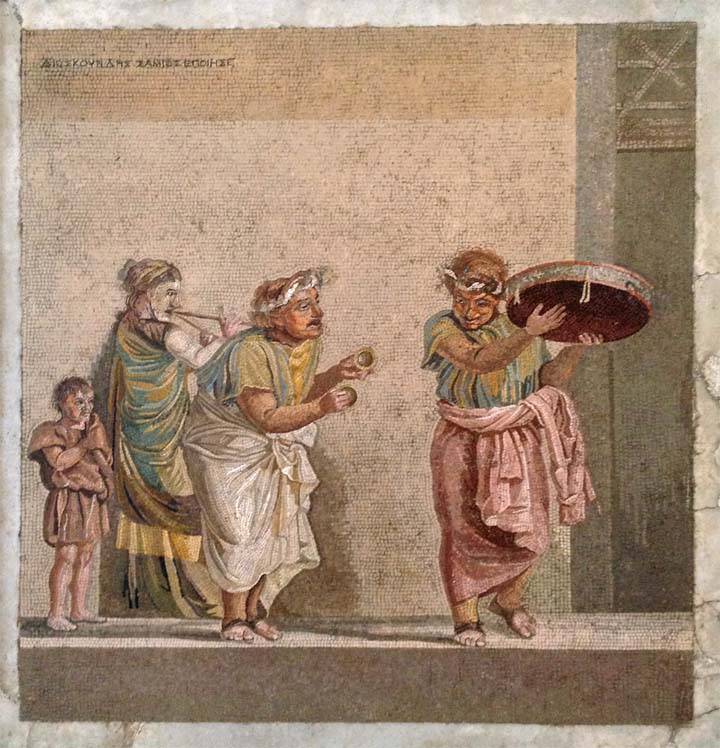 Mosaics are made out of hundreds if not thousands of tiny stones called tesserae. Using different colours, the original artists were able to create images of different figures and scenes, rendered three-dimensional through their careful use of shading.

The sentence in the top left corner reads in ancient Greek: ‘Dioscourides of Samos made this’. The Romans admired the Greeks for their art and this style of fine mosaic was much loved by art collectors of the later Hellenistic period in particular, especially after the mid-second century BC. It was found in the so-called ‘House of Cicero’, which includes another mosaic signed by Dioscourides. Since it’s mentioned specifically that Dioscourides came from Samos, it seems likely that he worked elsewhere, but whether this was in Pompeii or not cannot be said for certain. It’s also possible that Dioscourides was the creator of the wall-painting that served as the model for this mosaic.

This mosaic depicts a group of what are generally thought to have been street musicians or buskers. The men play a tamourine and cymbals, while the woman at the left plays the aulos or double-flute. The fact that they wear masks suggests that they are also actors, performing a scene from a play. Which play has long been the subject of discussion, but some believe it to be a scene from Theophoroumene (‘The Possessed Girl’) by the Greek playwright Menander (342/1–ca. 290 BC), of which only fragments remain.

Pictures like these give an idea of what life might have been like in the ancient world that texts alone cannot reveal. Pay particular attention to the colourful clothes worn by these musicians. Executed in exquisite detail, we can almost hear the music that they’re making.

Everyday life in Pompeii will be the subject of Ancient History magazine issue 13. You can read more about it on the editorial plan. Proposals are welcome on this and other topics.