The Celts: A Welsh Perspective 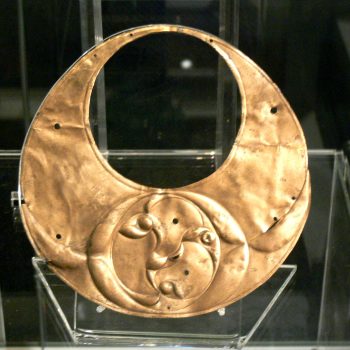 The Celts are a mysterious people. Or so it seems. Pretty much everything we know comes from what the Greeks and Romans wrote about them. Theirs is not unbiased reporting, but modern archaeology helps us rebalance our understanding. Finds recovered from the ground are revealing more of the world of these diverse, life-loving native peoples of ancient Europe – and especially in Wales. Where the Romans seem familiar to us, the Celts might seem foreign. As Colwyn Bay-born Terry Jones of Monty Python fame writes in Barbarians (BBC Books, 2006):

The attitude of both Greeks and Romans appears somewhat patronizing, but then why not? After all, the Celts were in every way inferior, with poorer technology, fewer skills and less science and understanding. To us, looking through the hindsight of history, it seems inevitable that Rome should have triumphed against these brave but backward people. But it wasn’t like that. It wasn’t like that at all. (p. 25)

Growing up in Cardiff, I had the good fortune of being able to visit Amgueddfa Cymru – National Museum Wales. I usually went there to study the Roman artifacts, but to access them I had to go through the gallery displaying the collection of pieces from Iron Age Wales. To my classically trained eyes, it was unsettling. Compared to the ordered geometric lines of the mosaic floors, the still-readable carved letters of the Latin inscriptions, and the naturalistic heads and tails of the coins, Celtic art looks decidedly unrestrained. It is geometric, but the underlying calculus is different with curves swirling into coils and splitting into triskeles; it is impressionistic with faces and bodies abstracted into lines and dots. Ironically, I felt I knew the Romans far better than my native ancestors. [caption id="attachment_71067" align="alignright" width="547"] 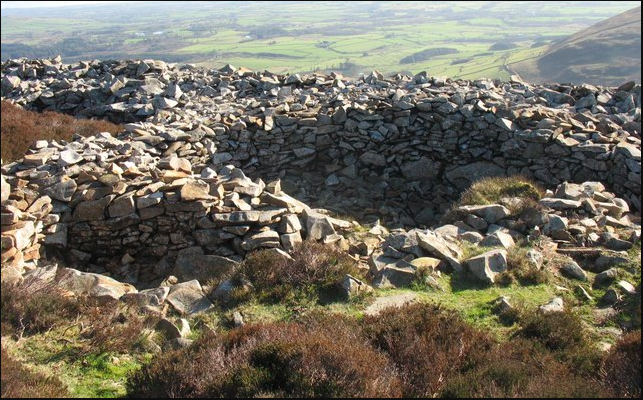 The stone footings of round houses at Tre’r Ceiri, a hillfort dating back to the British Iron Age, built around 100 BC.[/caption] From Roman sources, we know that Iron Age Wales was home to four nations: Ordovices (north-west); Deceangli (north-east); Demetae (south-west); and Silures (south-east). They lived in small farmsteads of thatched roundhouses, such as the ones reconstructed at St Fagan's. Some communities attended markets or festival days held in hillforts (or defended farms), such as Tre’r Ceiri, of which over one thousand have been identified in Wales. They tended to their crops and reared livestock. They were expert workers in bronze, iron, and gold, producing domestic utensils, weapons of war, and brooches. They were excellent horsemen and drove two-wheeled chariots, the remains of one of which were recently uncovered in West Wales. They told stories set in magical landscapes in which white horses appeared out of thin air and of giants such as Brân the Blessed, and beautiful, intelligent women such as Branwen, as well as heroic men such as Pryderi. They were deeply religious, worshipping gods, such as Amaethon and Arawn, by making blood sacrifices, or placating spirits by casting precious objects into lakes such as Llyn Cerrig Bach. When the Romans arrived, the Iron Age people in this promontory of the island of Ancient Britain did “not go gentle into that good night” as the later Welsh poet Dylan Thomas famously wrote. They fought back! Retreating from Claudius’ invading legions, which landed in AD 43, was Caratacus (Welsh: Caradog), war chief of the Catuvellauni nation (in what is now Essex) and the nominal leader of the British resistance. He chose to make his last stand far to the west with the Silures of South Wales. The druids continued the insurgency. In AD 60 or 61, the Romans hunted them down to their stronghold on Ynys Môn, the isle of Anglesey laying off the coast of North Wales. As Caesar had done in Gaul, what occurred there under Nero was a genocide. (read Tacitus’ account). The subsequent Roman presence in Wales was primarily a military one. Two legions guarded the access roads into Wales at Deva (Chester, Caer(llion Fawr)) and Isca (Caerleon). The interior was crisscrossed with a network of roads and fortlets to keep the natives in check. Some of the places founded by the Romans are now prefixed by the word ‘caer’ (fort) – Caerdydd, Caer Gybi, Caerleon, Caernarfon, Y Gaer – which suggests occupation and oppression. Two reasons they stayed were lead and gold: the mines at Dolaucothi attest to the Romans’ skill in the technology of moving vast amounts of water over aqueducts to facilitate the extraction process. [caption id="attachment_71066" align="alignleft" width="350"] 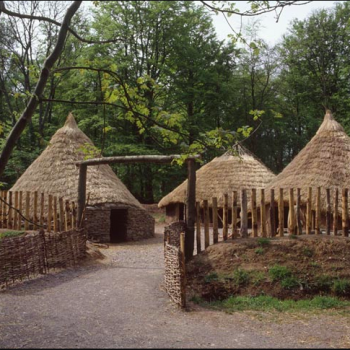 Reconstructed Iron Age British roundhouses at Amgueddfa Cymru – National Museum Wales, St Fagans.[/caption] What did the Romans ever do for us? The elites of the Silures did well in their new Roman town at Venta, (Caerwent), and the Demetae similarly at Moridunum (Carmarthen); but those in the north, not so much. Even though the Romans introduced codified laws, a common language, roads, money, market towns, plumbing, baths, security and all the rest (but not forgetting taxes that paid for them), they were nevertheless inaccessible to many of the native people. The old ways persisted on farms and in villages in the hills and vales. The modern names of the native places of the indigenous ancient people in Wales sing to a different tune. Capel Garmon, Moel Fenlli, and Tal-y-Llyn celebrate places of worship, hilltops, and lakes. Threats from overseas led the Roman authorities to sub-divide the island into four provinces. In the West, Britannia Prima outlived the Roman government’s final abandonment of the British provinces in the early fifth century AD. A hundred years or so after the legions left, the last vestiges of Roman Wales continued. The Romanised Celts in Wales had since become enthusiastic Christians. At sites across the land, milestones and crosses appeared along the roadsides; many were decorated with familiar twisting lines and knots; some were inscribed in Latin or Ogham script. These marked the territories ruled by a new generation of Celtic chieftains – men with Romano-British names, such as Pumpeius Carantorius, or with entirely native ones – Bodvoc and Conbelin. But soon new foreigners arrived. Now Viking warriors, then Norman barons, and later English kings. If what we know of the early Celts comes mainly from the Greeks and Romans, we also understand them through [caption id="attachment_71068" align="alignright" width="350"] 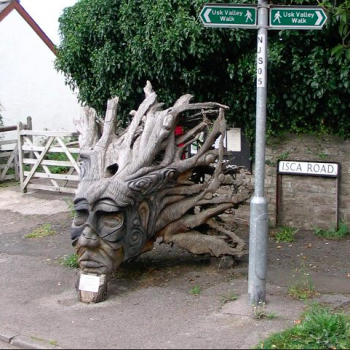 A tree stump has been carved into the face of a Celtic warrior and placed on a street corner in 'The Village', Caerleon.[/caption] the perspective of the eighteenth-century intelligentsia. In 1707, the Welsh naturalist, botanist, linguist, geographer and antiquary, Edward Lhuyd, recognized two branches of ‘Celtic languages’: ‘P-Celtic’ or Brythonic (Welsh, Breton, and Cornish), which were assumed to have come from Gaul (France); and ‘Q-Celtic’ or Goidelic (Irish, Scots Gaelic, and Manx), assumed to have an Iberian (Spain, Portugal) origin. Since they spoke a Celtic language, the ancient people of Wales were, through increasing use of the term, called Celts by modern historians. The myth is as modern as ancient. Whether the Celts of Europe were one people or many, has been hotly debated and, thus far, without resolution. To most people today, the word ‘Celtic’ is interchangeable with Irish or Scottish – much to the chagrin of Bretons, Cornish, Galicians, Manx, and Welsh, the other members of the so-called ‘Celtic Fringe’, with equal claim to it. The ancient peoples themselves did not identify as Celts; it was a word coined by the Greeks (Greek: Keltoi) and Romans (Latin: Celtae). They called the inhabitants of the British Isles Pretannike or Britanni. Their national and tribal names have been preserved in a few instances in the geographical descriptions of Ptolemy and Strabo, both foreigners observing and writing from afar. The word ‘Wales’ itself apparently derives from the Old English Wealas (plural of Wealh), a name often used by the Anglo-Saxons to refer to the Britons collectively and their lands – a name coined by foreigners, again. We, Welsh, call our country Cymru, and ourselves Cymro. It seems to have its origins in an unattested Old Welsh word combrog, meaning ‘co-lander’, ‘compatriot’, from com-, ‘with’, and brog (the modern Welsh bro), meaning ‘region’. Perhaps Cymro simply means ’fellow countryman’. [caption id="attachment_71065" align="alignleft" width="301"] 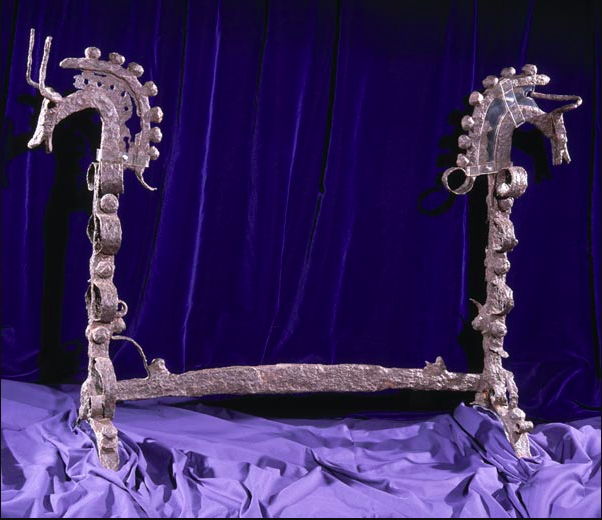 Iron firedog Capel Garmon, Conwy is considered to be one of the most important pieces of early decorative ironwork to have been found in Britain.[/caption] Our language is Cymraeg. Welsh is one of the oldest continuously spoken languages in Europe, perhaps close to the tongue used by those mysterious people we have come to call Celts when the Romans first encountered them. The sound of spoken Welsh is mellifluous, undulating, and rhythmic, punctuated by hard consonants, and smoothed by soft mutations. It could be said that it is the manifestation in sound of the curving lines, dots, and triskeles of the visual arts. With each archaeological discovery, the culture and history of the Celts in Wales and across Europe become clearer. Their mystery is gradually being stripped away. Yet, they lose none of their ability to fascinate and beguile; their art in bronze, iron, and gold only makes it more so. To learn more about the ancient Celts, be sure to read the articles Ancient History, Issue 33. But beware: you might fall under their spell. Born in Wales, Lindsay Powell is the news editor of Ancient History and Ancient Warfare. His books include All Things Under the Sun (2011) and Augustus at War (2018). His latest book, Bar Kokhba, will be released in Autumn 2021. For more about Lindsay and his work, click here.

Want to know more about the Celts and Romans?