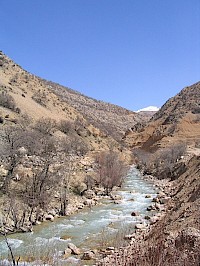 We were the first, after a millennium or two, to visit the site and know what had happened there. Early in the morning, we had hired a taxi in Shiraz and had left for Yasuj, 150 kilometers to the northwest. The driver had been a kind man, who tried to make us feel at home by endlessly playing a tape of Modern Talking, not exactly our type of music. After two hours, we had reached our destination.

In 1979, Henri Speck had tried to visit Yasuj as well. He lectured on English literature in Shiraz, and liked to explore the countryside, trying to find the Persian Gate, the mountain pass where Alexander the Great had forced his way across the Zagros mountains, into the heartland of the Persian Empire. Speck had already found out that the old identification, by Aurel Stein, was incorrect, and had established that the real mountain pass was the Tang-e Meyran near Yasuj. Unfortunately, he was never able to visit the place: in the small police station, he learned that the Revolution had started, that Americans were not safe. So, Speck left Yasuj, hurried to Iraq, forgot about the Persian Gate, and published his results in 2002. But he had never visited the site.

My friend Marco and I were more successful. It was easy to find the Tang-e Meyran, and we found the little path that Alexander used to circumvene the Persian positions after a bit of searching. By noon, we knew that Speck had been right. It was a pity that he was not with us, when we were standing there: the first western students of ancient history at the Persian Gate, the first to know what had happened over there. We felt privileged and lighted two special Italian cigars, which we had saved for the occasion. 18 February 2004 is one of the happiest days of my life.

This is an example of what is called “the historical sensation”: to touch the past, to know that you really have contact with something that happened long time ago. The French historian Henry Houssaye (1848-1911) once described the overwhelming nature of this experience, and when he explained what it was to feel present during a famous battle, he started to weep for joy.

He was right. History is nice, it is fun. That is enough. There is no need to use it for a practical purpose. Of course this does not explain why our governments pay money for historians. That needs another justification.