Today, I want to briefly discuss a series of books that readers of Ancient Warfare magazine have seen mentioned once or twice in certain articles. I’m referring, of course, to the Landmark series. The series editor is Robert B. Strassler and there have been four books in the series so far, namely: Herodotus (2007), Thucydides (2008), Xenophon’s Hellenika (2009), and Arrian (2010).

The translations themselves are modern, easy to read, and each chapter features a convenient summary of its contents in the margin of the page in question, in the manner of a school text (such as the old but elegant edition of Xenophon’s Anabasis that I’ve got on my shelf). There are also ample footnotes with further references and explanations.

But these books are more than simply new translations of famous Greek historians. They each feature a detailed introduction about the work in question and have various appendices written by noted modern commentators, such as Peter Krentz, dealing with different aspects touched upon in the text. For example, The Landmark Xenophon has appendices on Arginusae, Spartan government and society, Agesilaus, and political leagues.

What sets the books further apart from other translations is that they are also richly illustrated. Almost every place mentioned in the text by the ancient writer in question is indicated on maps that are sprinkled throughout the books. 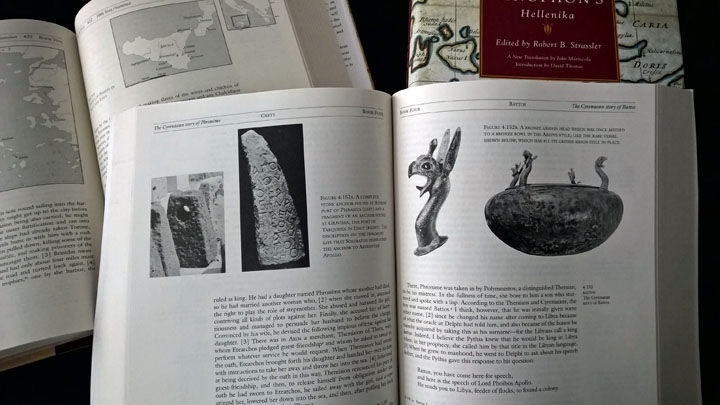 Furthermore, the text is supported by many photographs, all in grayscale, of artefacts and buildings either referenced directly by the writer or helpful in some other way. Only occasionally do I feel that the images should perhaps have been more carefully selected. An example would be the inclusion of a bronze statuette of a hoplite from the sixth century BC on page 243 of The Landmark Xenophon: bell-shaped cuirasses were not, as the picture may erroneously lead one to believe, worn by hoplites in Xenophon’s time.

Finally, another good aspect of these books that should be pointed out is that they are affordable. You can get a hardcover copy of a single book for around €30 or less; Amazon even offers them for a little more than $20 (and around $16 for the paperback edition). That makes them great value for money (and no, I wasn’t paid by the publisher to write that!).

So, in short, if you have any interest in the ancient world, you should probably get this series. If Alexander is more your thing, stick with The Landmark Arrian. For Classical Greece, you can’t go wrong with The Landmark Thucydides and Landmark Xenophon. For Archaic Greece, the Persian Wars, and the broader Mediterranean world, The Landmark Herodotus is the book to get. Of course, you’ll probably end up buying all of them eventually.

There is a website for this series of books with an overview of the volumes that are already out. According to the website, future instalments will include Landmark editions of Julius Caesar, Polybius, and Xenophon’s Anabasis. Sadly, though, the website doesn’t seem to have been updated since 2010, so I am curious to see when these books will be released.