The purpose of an archaeological museum

Last year, I visited an exhibition at the National Archaeological Museum here in Leiden. The exhibition was on the Merovingians. One of the display cases featured a collection of axe- and spearheads arranged in a circle. This prompted me to take the below picture and post a comment on my Twitter account where I asked, ‘When will museums be more than collections of things?’ 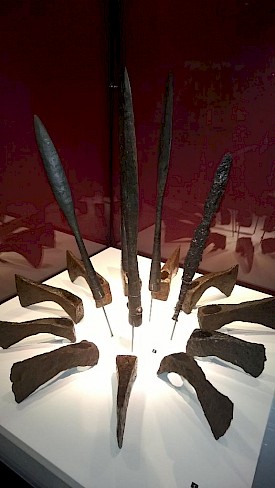 This led to some discussion online and I eventually was invited to visit the new Keys2Rome exhibition at the Allard Pierson Museum in Amsterdam. That, too, was pretty and interesting, but again it was largely glass display cases with generally attractive objects arranged in an aesthetically pleasing way.

I wrote a critical review of the exhibition that I published on my (now-defunct) personal website, but I think it’s worth just going back to my original question and further explain why I think an archaeological museum should strive to be more than just a collection of things.

First of all, archaeology is not about things. Or rather, it is not about the objects that we excavate in and of themselves. When a site is excavated and objects are collected and catalogued,  the real work of an archaeologist begins, namely putting all the pieces of the puzzle together and figuring out what life was like in the past.

In other words, an archaeologist uses artefacts and site data as a means to an end. When we excavate a house, for example, there’s usually tons of information to be found. Bits of painted plaster, along with stone foundations, well-made thresholds, and rooftiles give an indication that the house belonged to someone who was probably relatively well to do. The size of the house may tell us about the number of people living there. There might be a drain or perhaps the building had a courtyard with a well. In one room, we might find figurines representing gods, suggesting that it once housed a littled shrine.

By painstakingly excavating the structure room by room, layer by layer, we reveal more and more about not just the building itself, but also the people who lived there. We might find the remains of an infant buried beneath the floor of one room, a tangible result of a dramatic event in these people’s lives.

My main criticism of archaeological museums as ‘collections of things’ is that they don’t really get to heart of what archaeology is all about. It’s not about the things themselves: it’s about the people (both past and present, when we consider archaeology as social practice – but that is something I will get into another time).

It’s all about context

So let’s go back to that exhibit with the axe- and spearheads. What does that tell us about the Merovingians? The way that the objects are organized is meaningless. The objects themselves are devoid of context. Instead, this display case should have been more about a particular theme – warfare in Merovingian times, for example.

In the Keys2Rome exhibition in Amsterdam, they tried to give the objects more context by arranging objects in display cases according to theme. A display case labelled ‘Sport & Entertainment’ had objects relating  to gladiators, athletic competitions, and so forth.

That’s a step in the right direction, but you can do more. The museum in Leiden, for example, has a really neat exhibit about Athenian cemeteries. There is a mural that gives an impression of what a cemetery looked like, and a number of stelae are arranged in a way that they seem to be part of the mural – they give a real sense of what it must have been like to walk to Athens through one of these cemeteries (since most of them were arranged close to the gates). 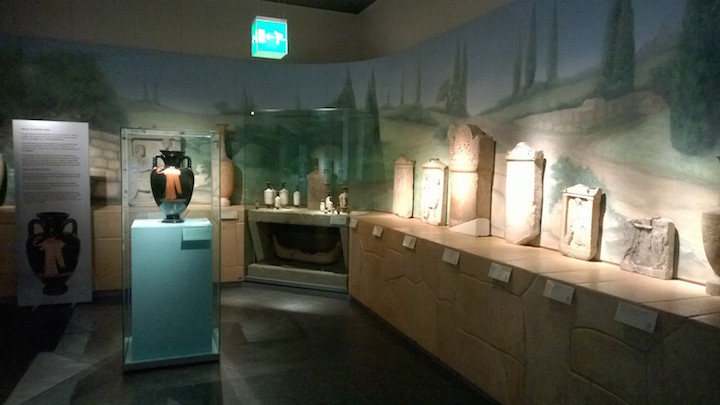 The central part of the exhibit features a display case with white-ground lekythoi, which were specifically made for funerary purposes. And beneath this shelf with pottery there’s a (re)constructed grave. 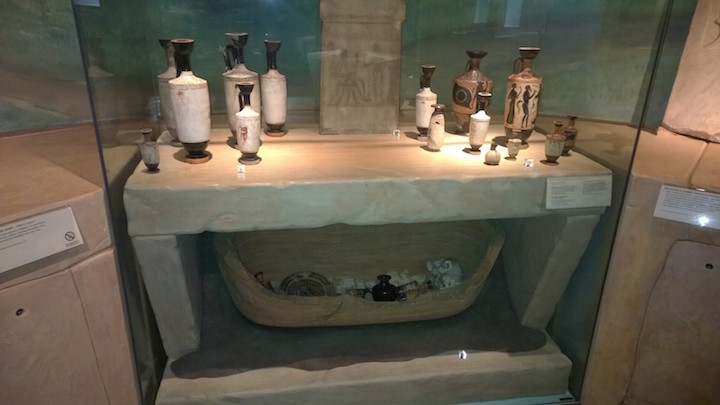 This goes a step above the average exhibit in an archaeological museum: not only do we see a collection of things, but we can immediately, using visual cues only, get a sense of what these objects are all about and how they were used in ancient times. (Though such visualizations are obviously not without their problems.)

It’s all about getting an idea of what the ancient world was like back then. It’s why in our magazines, we don’t just publish photos of ancient objects or structures. We commission artists to make the past come to life. That’s what any good archaeologist would do and what a lot of archaeological museums, in my opinion, don’t really do enough of.

What of the audience?

When I first posted my thoughts about this matter, some people said that they didn’t want archaeological museums to be more than collections of things. They said that they wanted to use their own imaginations rather than have the museum tell them what the ancient past looked like.

Fair enough, but the simple fact of the matter is that it’s very difficult to imagine what the past was like if you’re not trained in how to interpret objects and structures. Most people will need some sort of help. (It’s for this reason why most people get bored when they visit an archaeological site without a guide: it can be really hard to distinguish one pile of stones from another. The experience is too passive and regular visitors should be invited to take an active role.)

It raises the question what kind of audience an archaeological museum is intended for? In this day and age, where most museums have to fend for themselves financially, you have to cater to the general audience. This means that an archeological museum should be accessible and that its main role is largely to educate its visitors.

How you go about educating the visitors is perhaps largely a degree of taste. I think written text should be kept to a minimum. A museum should strive to convey as much visually – through reconstruction drawings, models, dioramas, and so forth – rather than through text. For the same reason, I think videos should be avoided: if I wanted to watch a video, I could do that at home.

So, in short, I believe that the best way to arrange an archaeological museum is to group objects together in a way that makes sense. Don’t focus too much on individual objects: an archaeological museum is not, after all, an art museum. Try to create a context for the objects and strive to convey information in as visual a way as possible that does not depend overmuch on either written text or video: allow people first to discover what these objects are just by looking.

This is a topic of great interest to me, so I will undoubtedly return to it at some point. The above, for what is worth, is too unsophisticated and requires further study. For now, though, feel free to sound off in the comments section below, as I’m curious to read your thoughts on the matter.