The spirit of adventure!

The theme of the first issue of Ancient History Magazine deals with explorers and exploration in the ancient world. For this issue, Johnny Shumate created a centrefold that seems to call back to the halcyon days of pulp magazines: a scene set in a dense, wooded area, with bronzed men facing off against a pack of gorillas while a volcano erupts in the background. 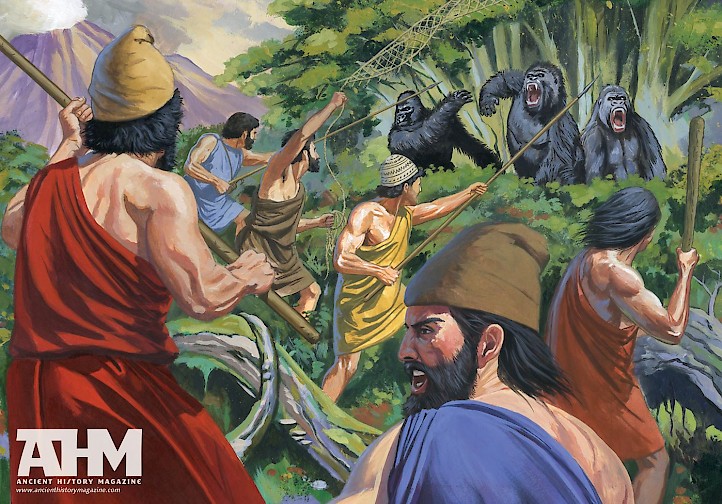 The colours in this picture and the way that Johnny has painted the various elements recall cover illustrations for Doc Savage Magazine or similar publications that were popular in the first half of the twentieth century, without falling into cliché. There is, for example, a notable lack of scantily-clad, busty women clinging to any of the men’s legs.

Pulp magazines – unlike ‘glossies’ or ‘slicks’ – specialized in adventure fiction. But what is adventure fiction? What makes a story ‘pulp’ (in the good sense)? Frank A. Munsey, best known as the creator of pulp magazine Argosy, wrote about the kinds of stories that he was looking for:

This quote and a much more detailed discussion of what ‘pulp’ is can be found over at the Pulp Magazines Project website, which is a great resource if you are interested in these kinds of stories (and who isn’t?). Many great writers were published in pulp magazines, most notably perhaps Robert E. Howard, creator of Conan, Kull, and Solomon Kane (among others).

The centrefold captures the spirit of adventure that pulp magazines were renowned for, and I think the contents of this first issue of Ancient History Magazine manages to elicit some of the same sort of magic. The big difference, of course, is that the contents of our magazine is all based on historical sources.

The centrefold illustrates an article by Murray Dahm on Hanno the Carthaginian and deals in particular with a short text known as the Periplus, a Greek translation of the Phoenician original. It features Phoenician adventures in Africa, facing gorillas, and – indeed – the text mentions an erupting volcano. Frank Munsey, I think, would have liked this.