The tomb of a musician?

I’ve blogged before about Paestum, the ancient settlement in Southern Italy originally founded by the Greeks as Poseidonia, conquered by the Lucanians, and subsequently turned into a Roman city. The site itself, with its excellently preserved temples, is a wonder to behold, and its museum is rich in ancient artefacts from the various periods of Paestum’s multifaceted history.

Among the many, many objects in the museum’s collection is this set of double-flutes: 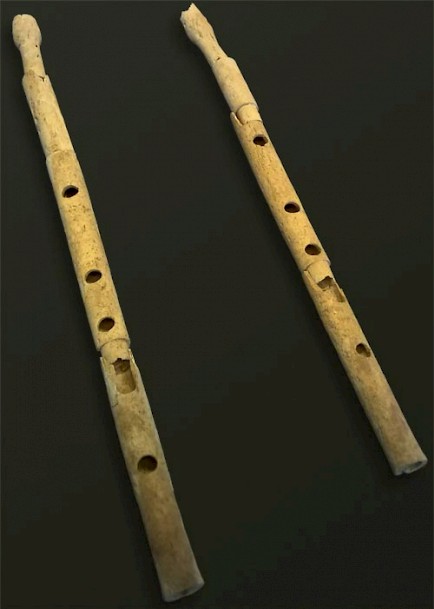 The Greeks referred to the flute as aulos, while the Romans called it tibia. Flute players commonly played two of them at the same time, and we sometimes see a sort of strap around the flutist’s head to ensure that the instruments stayed in place. They are different from the flutes that you might have had to play back in school and are actually more similar to the modern oboe. ‘Flute’ is therefore perhaps a bit of a misnomer, but as long as we all understand what we’re talking about, it’ll have to do.

The specimens pictured above come from tomb 21, excavated back in 1969. The burial has been dated to the end of the sixth and beginning of the fifth century BC, and therefore belongs firmly to Paestum’s Greek period. They are made from the bones of a deer (the Italian word in the museum’s description is cervo, denoting more specifically a buck).

The grave also contained the remains of a lyre, including made out of a tortoise shell; what the ancient Greeks referred to as the chelys. Here’s a picture of the shell itself: 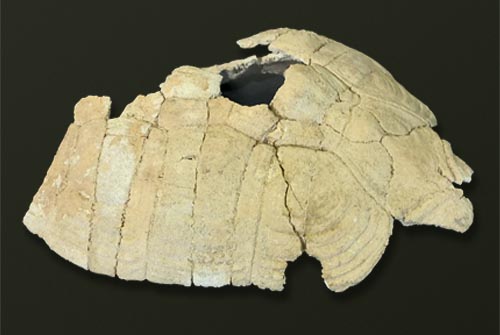 The temptation is great to regard the person entombed here as a musician. But in the newest Ancient Warfare (issue X.6), I warned specifically about being too hasty in ascribing a particular occupation to a dead person based on the finds in their tomb. In that case, it was specifically about the identification of a person as a ‘warrior’ because of the inclusion of weapons in the grave, whereas other finds included drinking vessels and other prestige objects.

In the case of this grave from Paestum, though, the only other object displayed by the museum was an alabastron, a small vessel used to contain scented oil (essentially, a perfume bottle). Music must have been important in this person’s life, based simply on the inclusion of the flutes and the lyre. So perhaps we wouldn’t be too wrong – barring any further information not provided by the museum – in believing the deceased to have been a musician in life.