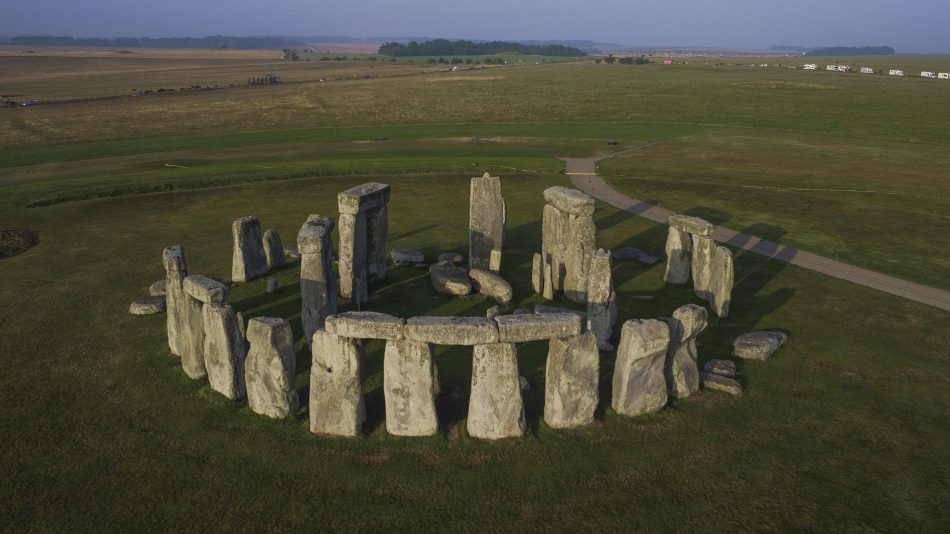 Stonehenge © English Heritage
While any trip to a museum is a trip back in time, the latest exhibition at the British Museum takes viewers far back into prehistory as it explores the story of Stonehenge, the world famous monument built 4,500 years ago around the same time as the Great Pyramid of Giza. 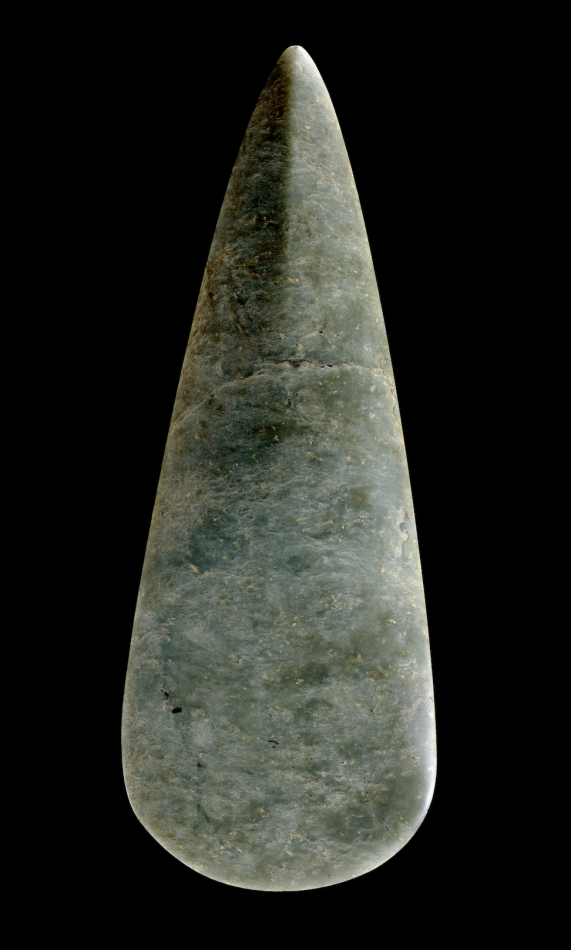 Photo (right): Fine jadeitite axe-heads made from material quarried in the high Italian Alps, c. 4500–3500 BC. © The Trustees of the British Museum
In his welcome address for the grand opening, British Museum Director, Hartwig Fischer noted that The World of Stonehenge, "Is the first ever major exhibition on the history of Stonehenge." It will feature over 430 ancient items, from 35 institutions, across six European countries. He concluded by acknowledging the tireless efforts put forth, 'under very difficult circumstances', to coordinate such a large endeavour during the pandemic. It must have been been quite the undertaking indeed, considering the recurring restrictions that have been in place over the past two years placing extra barriers to object loans and making museum visits generally difficult. This exciting new exhibition hopes to give the museum a solid start to 2022.

A trip through time The World of Stonehenge is split into 3 parts. It begins with objects pre-dating Stonehenge, things that belonged to the hunters, gatherers, foragers, and fishers who lived in tune with nature. This section also explores the introduction of farming and agriculture - the working of the land and use of stone for practical and artistic purposes. Lead curator Neil Wilkin, indicated that these people, "were experts at bringing out the aesthetic qualities of stone and understanding its significance."
The second section looks at other monuments and objects from places such as Orkey and Ireland that help contextualize Stonehenge. While the curators were obviously unable to get Stonehenge itself, they were able to get parts of Seahenge, the "Stonehenge of the sea", a circle of wooden 55 posts that resurfaced off the coast of Norfolk in 1998. Seahenge helps bring home the sense of the monumentality of these spaces which were used for worship and community gatherings. In addition, this is the first time Seahenge has ever gone on loan. 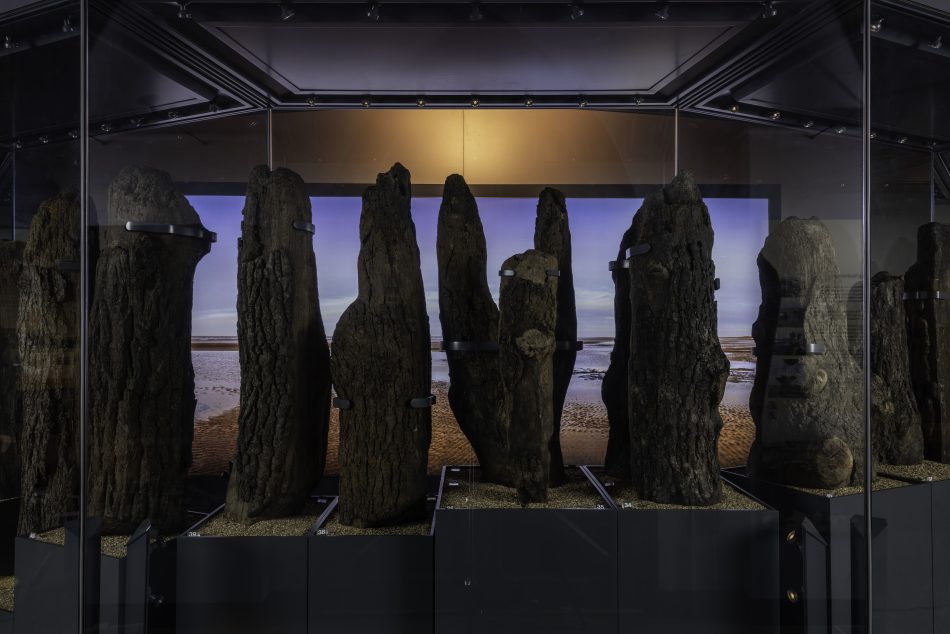 Seahenge timber posts on display in the Lynn Museum. On long term loan to Norfolk Museums Service from the Le Strange Estate.
The exhibition then moves onto the actual building of Stonehenge. How were these giant stones transported? Who moved them? How far were they transported? There is a short video that provides some answers to these question as it depicts the sarsen stones being hauled over great distances to their final destination. More than 80 of these stones were moved and they required approximately 1,000 people to help move them – an astonishing feat. 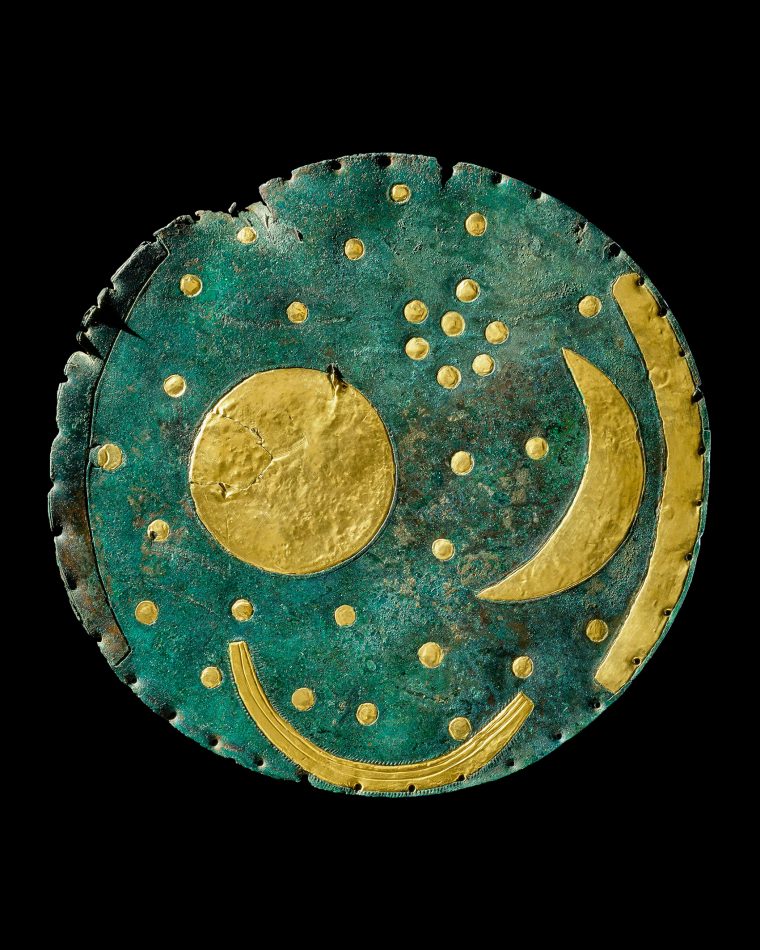 Photo (right): Nebra Sky Disc,  Germany, about 1600 BC. © Photo courtesy of the State Office for Heritage Management and Archaeology Saxony-Anhalt, Juraj Lipták
The final portion of the exhibition focuses on the importance of the cosmos to the people living at this time and the transition from the predominant use of stone to metal. The people of this period were fascinated with the skies, and this is reflected in objects such as the famous Nebra disc, known as 'the first official map of the sky'. It was discovered in Saxon-Anhalt, Germany and is dated to 1600 BC. The sun was also central to the beliefs of the communities of this period as they relied on it for their crops, energy, and power. The movement from cosmological beliefs being enshrined in stone monuments to portable objects is demonstrated in through the various stunning gold pieces that mimic the sun's rays, such as several beautiful disc neck collars, and the Schifferstadt gold hat that was decorated with astronomical symbols and was used in religious rituals. While Stonehenge and other monuments were eventually abandoned, people still wanted to be buried near it as a mark of status, such as the Bush Barrow chieftain whose hoard is on display in its entirety for the very first time. The chieftain was buried with a stunning gold lozenge across his chest that is a must-see item on display here. As the use of spaces like Stonehenge waned, metal became the dominant medium that people used to express social, religious, and political ideas. The exhibition features swords, jewelry pieces, shields, armor, and musical instruments made of metal that depict this important shift. The exhibition ends with the Shropshire Bula, a small yet intricate gold piece that Wilkin felt captured the many of the overarching themes of the exhibition: 'connectivity, sophistication, and the importance of the sun in a single gold object' 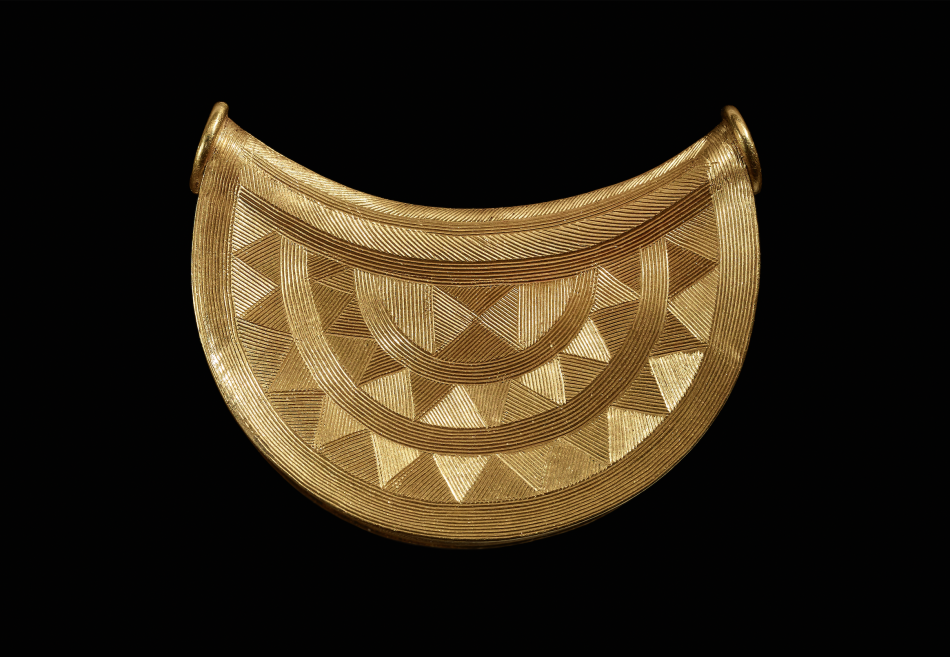 Bronze Age sun pendant, 1000–800BC © The Trustees of the British Museum[/caption]

The 'emotional heart' of the exhibition

Wilkin, stated that the aim of The World of Stonehenge is to, 'Introduce you to the times that the monument was built, the way in which it changed, and how society of the times reflects those changes. And also, to introduce you to the people. The people who visited Stonehenge, the people who built Stonehenge, the people who were buried in that landscape. This is the 'emotional heart' of the exhibition.' Important finds such as the Burton Agnes chalk drum, buried with three children, two of whom were clasped in an embrace, speak to this deeply personal aspect. This particular object gives viewers a brief glimpse into the grief and loss of the people who lived during that time. Fischer stated that the drum, "Is the most important piece of prehistoric art to be found in Britain in the last hundred years and we are honoured that the British Museum will be the first place the public will be able to see this important object." Along with expressive items such as this, there is definitely a powerful sense of awe felt as one moves through, and marvels at, the sophisticated and impressively crafted artifacts on display. The World of Stonehenge lifts the veil off a poorly understood, but pivotal, period in Britain's history with innovative and eloquent storytelling about the places, objects, and culture of this bygone mythical world and its inhabitants.

The World of Stonehenge will run from Feb 17 – July 17, 2022. Open Saturday – Thursday 10.00–17.00, Friday 10.00–20.30. Last entry 90 mins before closing. For more information, and to purchase tickets to this must-see exhibition, please click here. Follow us on Instagram @ancienthistorymag to see more beautiful items from this exhibition in our highlights!