Last month, I spent several weeks in beautiful Southern Italy. During that time, we also managed to revisit Paestum. I first visited Paestum in 2012, but unfortunately I either forgot my camera or my batteries had run out, and was so unable to take any pictures, much to my chagrin. This year, however, I came prepared and took more than 700 pictures in the museum and on the site. One of them already made its way into the fiftieth issue of Ancient Warfare.

Paestum is a beautiful site with a great museum. This Italian town is located in the province of Salerno in the region of Campania (with Naples as its capital). The city was founded in ca. 600 BC as Posidonia by Greeks, probably from the city of Sybaris. Sybaris itself is located further south, close to Taras (modern Taranto), and was in turn founded ca. 720 BC by people from Achaea and Troezen, a region and city respectively in the Peloponnese. The inhabitants of Sybaris gained a reputation for hedonism (hence ‘sybaritic’ as a byword for opulent luxury). 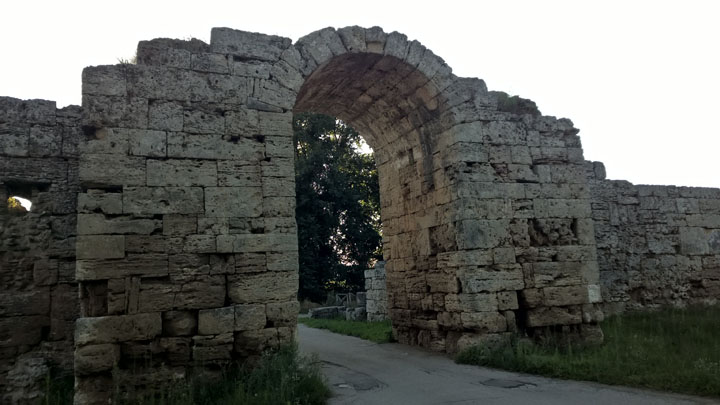 Posidonia was located near the coast and named after the ancient Greek god of the sea, Poseidon. Located close to Naples and other Greek foundations such as Cumae, the inhabitants had to compete with the originally Euboean colonists there, as well as with the Etruscans from further north (modern Tuscany), who were also active in these southern regions of Italy.

Posidonia flourished in this fertile region and some of the most impressive archaeological finds date from this period, including the monumental stone temples and the so-called Tomb of the Diver (ca. 475 BC). But at some point in the fifth century BC, probably towards the end, the city was conquered by the native Lucanians, who spoke an Umbrian-Oscan language and who were neighbours of the Samnites. The city was renamed to Paistos and the archaeological finds show a mixture of Greek and Oscan material. Most of the famous tomb paintings, discussed in tomorrow’s blog post, date from the fourth century BC and thus belong to the period in which the settlement had been annexed by the Lucanians.

The Greco-Lucanian inhabitants of Paistos ally themselves with Pyrrhus of Epirus when he arrives in Italy in 281 BC to lend aid to Tarantum (Taras) against the Romans. The Romans nevertheless managed to conquer much of the Italian peninsula by 272 BC. Paistos was refounded as the Roman city of Paestum. In this form, the city managed to grow and flourish until the fourth century AD, after which it slowly declined. It was abandoned by the seventh century.

By the eighteenth century, renewed interest in ancient sites – thanks to the discoveries at Pompeii and elsewhere – led to the rediscovery of Paestum. The modern village has about a thousand inhabitants and seems to rely largely on tourism. Fortunately, the site is never very crowded, perhaps because it is a little out of the way, though the train that runs between Naples and Sapri stops there and the station is only a short walk from the site and the museum.

Tomorrow I will write in more detail about the many beautiful painted tombs unearthed in Paestum and the surrounding area. The day after the tomorrow I will focus on the three large temples on the site, which are among the best-preserved Greek temples anywhere.