This is the third and final instalment in my series on the ancient city of Posidonia/Paestum. In the first blog post, I wrote a brief history of the site. In the second, I focused on the tomb paintings. In this final blog post, I want to draw your attention to what are perhaps the most impressive archaeological remains on the site: the three monumental stone temples, which are among the best preserved Greek temples anywhere.

The excavated area is quite extensive. The city was surrounded by a wall, large parts of which are still visible, along with rectangular Roman watch towers (which seem to be used for storage by the archaeological service or the municipality). The excavated area occupies roughly the middle portion of the walled area, running from south to north. 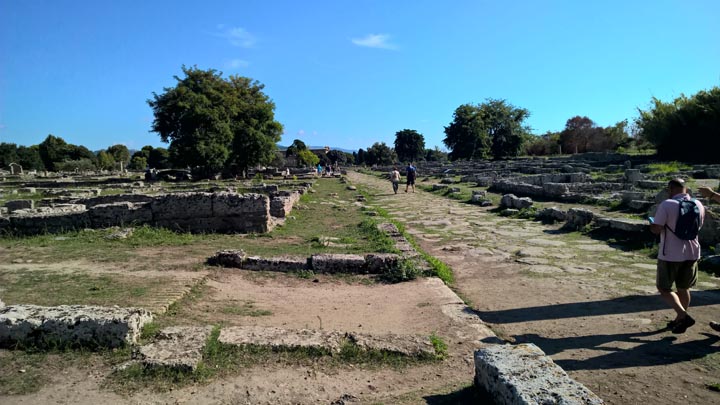 The site contains the remains of a large open area (the Roman forum and Greek agora respectively, according to the map), dwellings (of which only the stone foundations remain), a swimming pool, monument to a hero, bouleuterion (senate), amphitheatre, and other structures; there are two sacred areas (urban sanctuaries) or temple precincts. The site gives a good idea of what a small Roman town might have looked like that had a history that stretched back to the sixth century BC.

Regarding the temples, there is one in the north, traditionally referred to as the ‘Temple of Ceres’. Then there are two more temples in the south part of the town, flanking the so-called ‘Via Sacra’. The northern one is referred to as the ‘Temple of Neptune’, while the southern one was originally called the ‘Basilica’. The names date back to the eighteenth century; modern archaeological research has revealed further information that allow us to properly interpret the structures. All temples are oriented east-west. 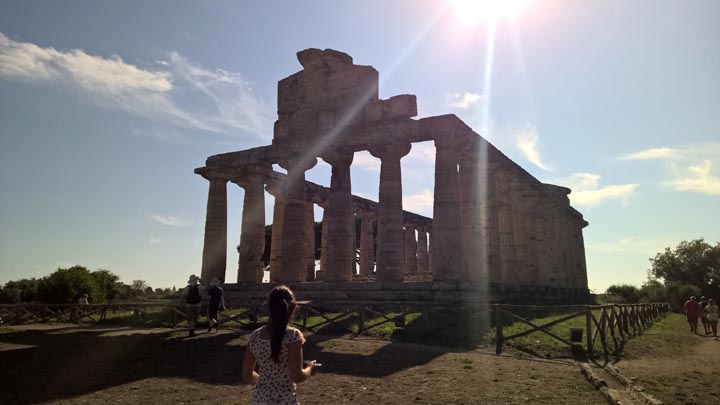 The northernmost temple was originally identified as dedicated to Ceres, the Roman equivalent of Greek Demeter, the goddess of agriculture and fertility. However, excavations revealed a large number of statuettes of the goddess Athena, so that the temple must have been dedicated to the goddess of wisdom and warcraft. It is a Doric temple built around 500 BC. Originally, the pronaos (the portico leading to the main room, the naos or, in Latin, cella) featured Ionic columns. Nearby are also the remains of the foundation of an earlier temple, dated to ca. 580 BC. 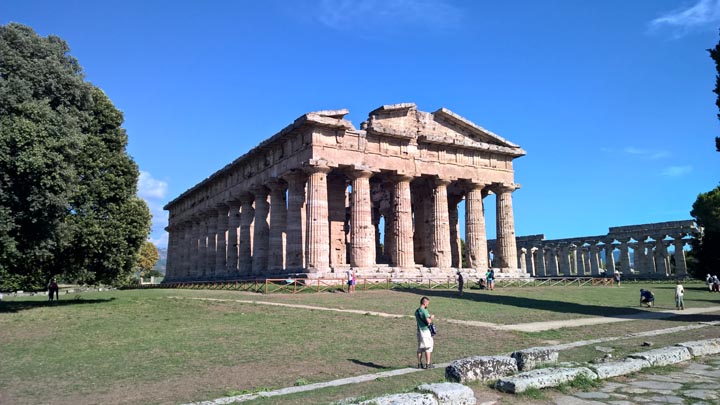 The best preserved of all the Greek temples in Southern Italy is the massive ‘Temple of Neptune’ located in the southern urban sanctuary. It is the largest of the temples at Paestum and is generally thought to have been dedicated to Poseidon, after whom the Greeks had named their city (Posidonia). However, it may also have been dedicated to Zeus, Hera, or even Apollo. Nearly all of the constituent parts of the temple have survived. It was probably built in the second quarter of the fifth century BC.

This impressive temple adheres to Classical proportions: there are six columns on the short sides and thirteen on the long sides. The Doric columns, carved from local limestone, are almost nine metres tall, and each has 24 flutes. Inside, a high step leads from the pronaos – with two columns set between pilasters – to the naos. At the back, there is also an opisthodomos, similar to the pronaos, but without offering access to the naos. It was used for storage of votive offerings and the like. 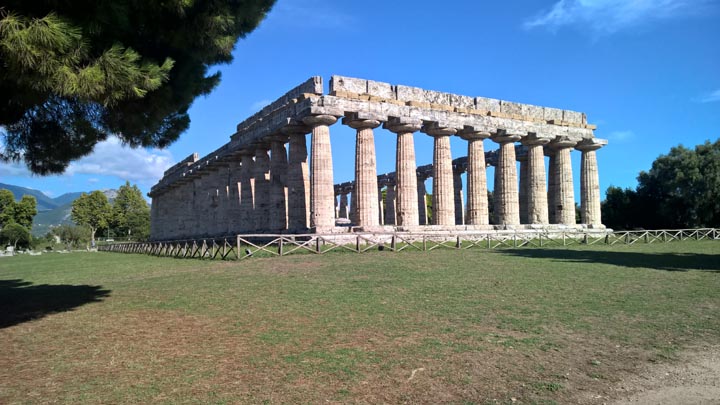 This structure was originally referred to as the ‘Basilica’ on account of the large number of columns on the short sides and the lack of pediments, which led thinkers in the eighteenth century to believe it was used for civil rather than religious purposes. However, it is clear now that it was a temple, and in fact is the oldest of the temples at Paestum still standing. It dates back to the middle of the sixth century BC. It has nine columns on the short sides and eighteen on the long sides. The temple is made largely of limestone, but excavations have revealed that other parts may have been made of softer sandstone, including perhaps the now lost frieze and pediments.

Columns along the long axis of the temple divided the naos in two, which wasn’t strictly necessary for architectural purposes. Finds from in and around the temple suggest that it was dedicated to Hera. Based on the finds unearthed here, men may have worshipped her as a warrior goddess, while women appropriated her as the goddess of birth and growth. The altar has been preserved and can be seen in front of the temple. In ancient times, people practised their religion outside of the temple, not inside (unlike a modern church, for example).

The above photograph shows part of the terracotta elements that once decorated the edges of the tiled roof. The waterspouts have the shape of lion heads, a very common decorative element form the ancient Greek world. During rain, water would run along the roof tiles and be collected at the edges, from where it would flow through holes and leave in a stream from the mouths of the lions. It must have had a wonderful effect.

There’s lots more that we can talk about when it comes to Paestum. I haven’t even discussed the beautiful metopes from the temple of Hera at the mouth of the Sele, for example, which include reliefs showing episodes from the stories of Heracles and the Trojan War. It’s a beautiful site with a fantastic museum, and if you ever happen to be in Southern Italy, you owe it to yourself to pay it a visit. For now, you can check out the website.