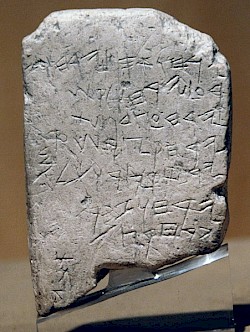 Let’s face it: life is just one day after another. “The sun ariseth, and the sun goeth down, and hasteth to his place where he arose,” says Ecclesiastes, adding that this was all very wearisome. Given the tedious repetition of days, it is a bit odd to count them. Neither hunters nor the first farmers needed a calendar. The changing seasons gave sufficient warning of what was going on. Once your crop was ready, you could harvest it. In most agricultural societies, there was no need to measure time very accurately. There certainly was no need to construct a complex calendar.

The first calendars were impractical. Here is W.F. Albright’s translation of a calendar found in Gezer in Israel (now in the Archaeological Museum in Istanbul). It dates to about 900 BC.

His two months are vine-tending
His month is summer fruit.

This calendar is problematic. To start, it looks like the poem’s rhythm dictates the information: three times two months, three times one month, two months, one month. Worse, it is just wrong to say that one solar year is identical to twelve lunar months: twelve times 29 ½ days equals 354 days, and that means that after three years of twelve lunar moons, you start picking your summer fruit a month before it is ripe. A farmer who used this calendar would, in a couple of years, be bankrupt.

Although equaling twelve lunar months to one solar year is impractical, it must have been the first phase of calendar design. The second phase must have been the insertion of extra months. For example, you could add one month every three years. This isn’t perfect, as you’d be one month behind after eight years, but it’s still an improvement.

From Babylonia, we know that it was the king who ordered the “intercalation” of months and we can be quite sure that this was done seriously. The rivers Euphrates and Tigris have the unpleasant habit of flooding just after the fields have been sown, so it was imperative to be prepared. Given the importance to the Babylonians, it comes as no surprise that we find the first real intercalary system in Babylonia: a cycle of twelve years of twelve months and seven years of thirteen months is almost perfect. It is only logical that this was introduced at the moment when Babylonia was conquered by the Persians (539 BC): if there was no Babylonian king to order intercalation, there had to be some kind of automatism.

This cycle is known as the “Cycle of Meton”, after an Athenian scientist who introduced it in Greece in 432 BC. At that moment, the Babylonians were already perfecting it and in 331/330, Alexander the Great learned that an even better cycle had been discovered, which is one day shorter. It is now called the “Cycle of Calippus”, after the man who introduced it in Greece.

At the start of this article, I mentioned that there was often no need to come up with complex systems to measure the passing of days. However, the exception is Babylonia. There, an accurate calendar meant the difference between a good and a bad harvest. There were religious reasons as well, because a good calendar was necessary to predict lunar eclipses. But that’s a completely different story.

Editor’s note: this is the first of seven pieces on the way the ancients measured time. This series is meant to show you how Ancient History Magazine will use different perspectives to give an idea of what the ancient world was like.