When and where did people first start to divide the day into hours? The earliest evidence points toward Egypt at the end of the third millennium BC, where priests were already dividing the day into 24 hours.

Initially, the hours were divided between the day, periods of twilight, and the night, but from the late second millennium BC onwards, both the Egyptians and Babylonians simply reckoned that day and night each consisted of 12 hours. According to Herodotus (2.109), the Greeks adopted the system from the Babylonians.

The length of the day depends very much on the season (due to the earth’s rotation around the sun) and as a result the ancient hour did not have a consistent length comparable to our own. Hours were longer during the day in summer than during the winter. In order to understand what hour it was, people looked at the length of their shadows during the day (as shadows shorten and lengthen before and after what we consider noon).

For a more exact measurement of time, the ancient Egyptians developed a water clock made from stone, copper, or pottery. The Greeks referred to it as a klepsydra (the Latinized variant is clepsydra), literally a ‘water thief’. An inscription in his tomb identifies one Amenemhet, a court official who lived ca. 1500 BC, as the inventor of the water clock. The earliest examples date to around the same time, the Eighteenth Dynasty (1550–1295 BC).

The clepsydra is essentially a wide vessel with a hole at the bottom that could be plugged. In order to keep time at night, the vessel was filled with water, which was then allowed to drain. The water would take exactly twelve hours to pour through the hole; marks on the inside of the vessel’s walls marked the precise hours as the water level decreased. This way, Egyptian priests were assured that they could perform the necessary duties at the correct hour.

Water clocks became a common method of telling time in the ancient world. The so-called ‘Tower of Winds’ in Athens, built in the early first century BC, is a marvel of engineering, containing both sun dials (about which more in a future post) and a water clock inside. This monument can still be seen in Athens today, even though it might not be immediately apparent what it must have looked like when it was in operation (picture from Wikimedia Commons): 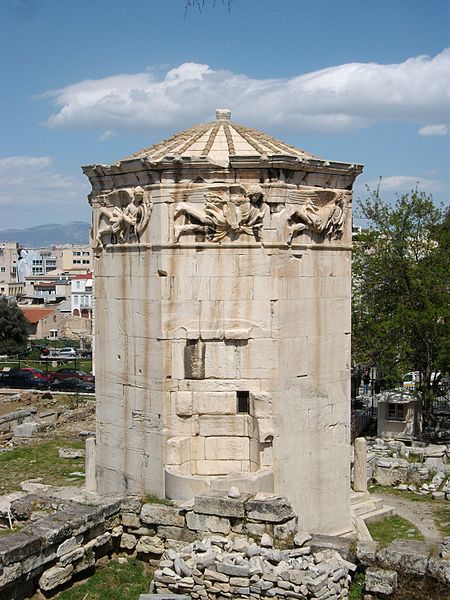 Water clocks were also used to time events. From at least the fourth century BC, water clocks were used in court houses to make sure that speakers stayed within their allotted time to talk. This practice was also adopted by the more litigious Romans in their own courts and ensured that proceedings moved along at a steady clip.

Hellenistic astronomers of the last few centuries BC, who still used the Egyptian system of dividing the day into 24 hours, began dividing the hours into sixty minutes for more accurate time-keeping, following the Babylonian system of counting (which was sexagesimal). This system survived the middle ages and is still used today.