Tomb of a Phoenician king

The sarcophagus depicted below was discovered in 1923 in one of the Phoenician royal tombs in the Libanese harbour town of Byblos. It is on display at the National Museum of Beirut, but a copy can also be found in the Royal Museums for Art and History in Brussels. 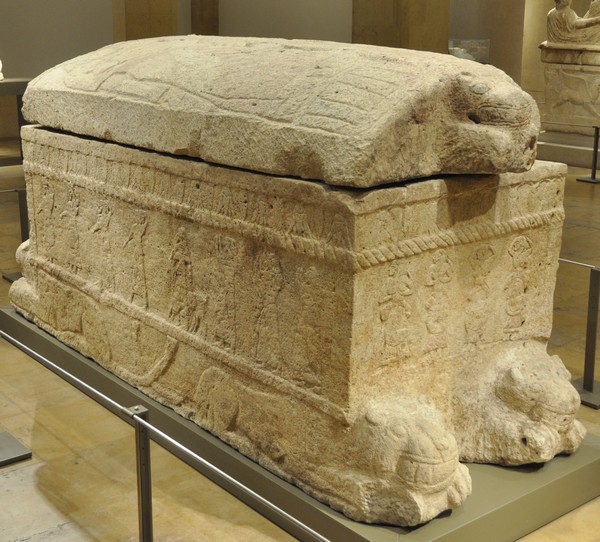 The sarcophagus is made from two large pieces of stone and decorated with the heads of lions in the corners below and on the lid. Reliefs with wailing women decorate the short sides of the sarcophagus. We see the deceased seated on a beautiful throne: it is the king of Byblos, who is receiving a long line of subjects, extending to both of the long sides of this stone coffin. The arm rests of his throne are made in the shape of a winged sphinx, a motif also known from Megiddo: 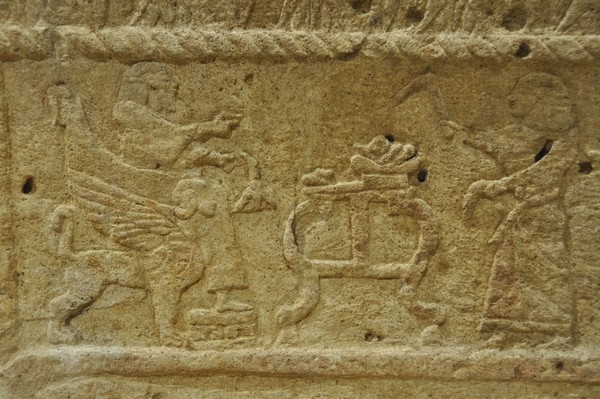 This museum piece is noteworthy for featuring an inscription on the lid, which is the oldest known text written using the Phoenician alphabet. In the translation by P. Kyle McCarter, the inscription reads:

The sarcophagus that Ittobal, son of Ahirom, the king of Byblos, made for Ahirom, his father, when he placed him in eternity.

Ahirom must have lived in the tenth century BC. He was a contemporary of King David and his son Solomon, and of King Hiram of Tyrus. It looks like Ahirom was a usurper, because the name of his father was apparently not worth mentioning – and therefore not a king. Ahirom’s son Ittobal appears to have been deposed, since his grave is unknown. It’s clear that these were tempetuous times.

There’s also a curse on the lid:

And if a king among kings or a governor among governors or the commander of an army should rise up against Byblos and uncover this sarcophagus, may the scepter of his rule be uprooted, may the throne of his kingship be overturned, and may peace depart from Byblos! And as for him, may his inscription be effaced with the double edge of a chisel.