Cyprus is perhaps one of the most interesting areas of the ancient Mediterranean because it is similar to Greece, yet also unique. From our point of view, ancient Cyprus seems to have always lagged behind a bit, clinging to older traditions that had long since gone the way of the dodo in mainland Greece. You can see this quite clearly when looking at Cypriot statuary, for example, which tends to look a generation older than it really is when compared to Athenian statues.

The British Museum has a good collection of Cypriot artefacts. I’ve already written before about a triple-bodied warrior. They also have this wine jug on display, featuring a beautiful depiction of a chariot in action: 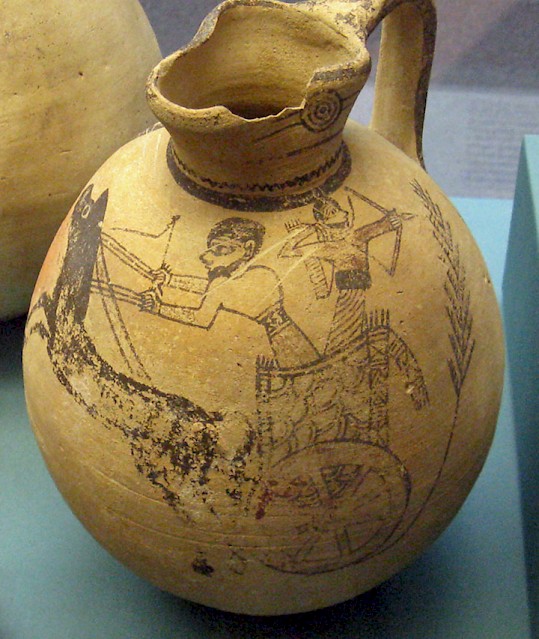 The accompanying plaque gives the date as somewhere between 750 and 500 BC. It seems clearly modelled after depictions of chariots from the ancient Near-East, especially Assyria (the large wheel and the dress of the archer is an indication). If so, it might be dated more precisely to a little before the end of the seventh century BC, but that’s only a guess, really. Only a single horse has been depicted, but in reality a chariot is pulled by a team of two or four horses. The number of reins depicted in the chariot driver’s hands suggest that we have to imagine more horses than are actually shown.

The description in the British Museum points out, correctly, that chariots were important on Cyrprus and even continued in use until around 400 BC. Models were offered to the gods and, indeed, this vessel was deposited at the sanctuary of Apollo-Reshef at Pera Frangissa (on Reshef, you might want to have a look at this paper). Chariots were also buried in tombs of kings, as a display with a full-scale reconstruction of such a chariot points out at the Allard Pierson Museum in Amsterdam.

The use of the chariot on Cyrpus is something cited as a ‘Homeric’ characteristic of Cypriot society. Yet, the chariot depicted on this vase shows an archer instead of a spearmen. All depictions of chariots from Greece, whether Mycenaean or later, depict chariots as vehicles used to transport (heavily-armed) spearmen to and from the battle, in the manner also described in the Homeric epics. But the chariot shown on this vessel depicts the chariot as a mobile platform for an archer, exactly in the manner that they were used in Egypt and other parts of the Near East in the Late Bronze Age and beyond.

This object thus raises a number of important questions. Does this pot show that Cypriot chariots were (sometimes?) used as platforms for archers? Is the subject matter wholly derived from the ancient Near East? If so, can we conclude that it cannot be used as a source of information about local, Cypriot practices? Was it even made in Cyprus, or was the maker even Cypriot in origin? Further research (insofar as the answers aren’t already known and simply omitted from the museum’s plaque!) would undoubtedly prove interesting.