A horseman from Rhodes

I was in Rhodes three years ago and took an awful lot of photos in the city’s archaeological museum. Today, I want to briefly focus on a picture I took of a black-figure olpe that depicts a horseman flanked by two youths: 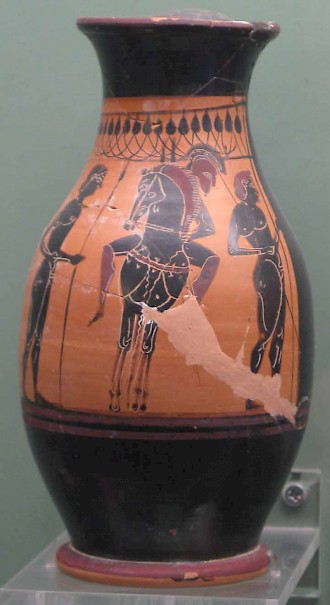 ‘Black figure’ is a technique in which the figures are given a dark colour and details are inscribed using a sharp object, like a pen or knife. It rose to prominence in Athens in the Archaic period, especially the sixth century BC, before it got slowly replaced by ‘red figure’. In red-figure vase-painting, the painter filled in the backgrounds and left the figures free, adding details with fine brushes. They didn’t use paint, but simply a clay slip with different chemical characteristics to the clay used for the actual pot.

This particular scene has been attributed to the so-called ‘Wraith Painter’ and dated ca. 540–530 BC. This olpe – essentially a wine jug – was found in a grave with a few other items of pottery, including another black-figure olpe attributed to the same painter that features Heracles wrestling with the Nemean Lion. All the pottery in the grave is associated with consuming alcohol and, along with scenes of violence, can all be assumed part and parcel of an burial package that identifies the deceased as a member of the elite.

Ancient Greek painters preferred to depict people and animals from the side, since that’s easier to draw than from the front. Sometimes, though, painters experimented, as in this particular instance, where the horse is shown frontally apart from the head, which is turned to the side. The painter took care to depict all four legs of the horse.

The warrior doesn’t seem to be equipped with a shield, but two points sticking out from above the horse’s main might suggest he is carrying a pair of spears. He’s also equipped with a Corinthian helmet and wears greaves. The horse has a bridle and a band across the chest might suggest that the warrior is using some sort of saddle rather than a blanket or reading bare back. The two spear-carrying youths on either side of the rider migth be squires or attendants.

We can’t really tell if this horseman is supposed to be part of some kind of unit of cavalry or whether he’s a messenger, a scout, or someone who’s planning to travel to the battlefield on horseback and then dismount to fight on foot. That’s one of the frustrating aspects of ancient Greek vase-painting: it’s quite detailed and seemingly life-like on the one hand, so that the impulse to take it at face value is great, while on the other hand it’s also rather vague as far as the context and significance of a scene like this are concerned.

Nevertheless, it is a great-looking example of Archaic Greek pottery.