A rider from Taranto

Next month, I’ll be travelling to the UK to attend the International Ancient Warfare Conference. I’ll be giving a paper that revisits the very first peer-reviewed article that I ever wrote, which suggested that what we commonly refer to as ‘hoplites’ (heavily-armed Greek warriors) originally started out as what we might call mounted infantry. More specifically, I suggested – building on work by Snodgrass and Detienne – that most elements of the ‘hoplite’s’ panoply were actually invented specifically for use by men who spent a lot of time on horseback.

More specifically, I thought that this hypothesis explained the peculiarities of the Argive shield, with its hollow shape and double-grip. A shield like that, which covers the left side of a man when he’s holding onto his horse’s reigns, would be perfectly suited for use on horseback. (A shield that was slung around the back and carried by a telamon (strap) across the shoulders and neck would bounce off the horse’s hind quarters.)

Depictions of heavily-armed men on horseback are exceedingly common in the seventh and sixth centuries BC. These men clearly rode to the battlefield on horseback and then dismounted to fight on foot. There are lots of painted scenes available where these warriors are associated with horses; even the Chigi Vase depicts young men on horseback (squires?) on the frieze immediately beneath the main battle scene.

One of my favourite depictions of a mounted ‘hoplite’ is perhaps the little bronze rider made in Taranto that is depicted below. It dates to ca. 550 BC and is currently on display in the British Museum. If you look carefully at the left arm, you’ll see that it must have originally held a little Argive shield. It’s a perfect example of one of these mounted figures. 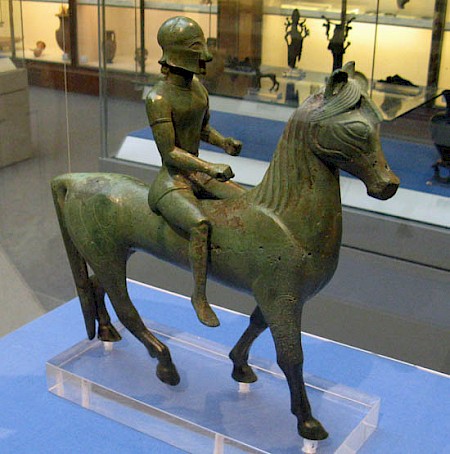 The original article – which you can read online – was published in 2007. The hypothesis hasn’t received a lot of traction, even though I do see my article mentioned occasionally in footnotes. Eight years later, I still believe that the evidence presented in the paper stands and that the hypothesis is worth revisiting. It’s my hope that I’ll be able to stir the pot, so to speak, when I give my talk in Wales later this summer.