A triple-bodied warrior in London

Last year, when I was in London, I naturally seized the opportunity to visit the British Museum. The collection they have there is great and you really need a couple of days to properly explore the entirety of the museum. One of the most interesting objects that I saw was this terracotta statuette: 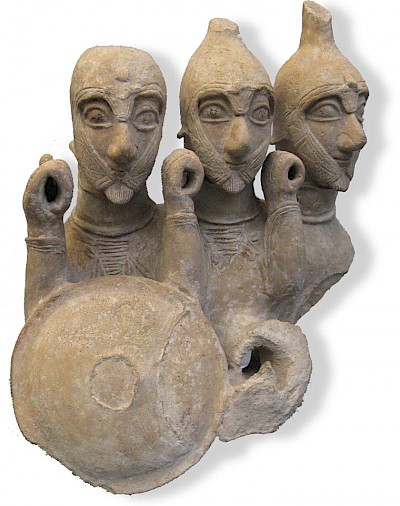 It dates to 650–550 BC and was found near Pyrga, on Cyprus. The plaque explains that this triple-bodied warrior is equipped with kit normal for the period. The text goes on to say that it was originally ‘placed in a sanctuary by a warrior-aristocrat to express his military role, piety and social status’. I assume it was found at a site identified as a sanctuary.

The text on the plaque notes that this figure is ‘a supernatural being’, but doesn’t go any further. However, the only triple-bodied warrior that we know of is Geryon, a fearsome giant who owned a herd of cattle that Heracles was told to obtain as part of one of his Twelve Labours. In other depictions of this curious giant, he seems to possess not just three heads, but also three bodies, three sets of arms, and three sets of legs. In other words, he appears as a conjoined triplet, with each man attached to the other by the hips.

And yet, maybe it is better that the British Museum opted not to identify this triple-bodied warrior as Geryon. The key phrase in the above paragraph is ‘that we know of’. We tend to base a lot of our interpretations of Greek art on the extant written sources and these only represent a fraction of the vast body of literature that once existed. What is more, there were undoubtedly local traditions that were never written down and thus are lost forever. On Cyprus, they might have had different stories about triple-bodied warriors that had nothing to do with either herds of cattle or Heracles.

Indeed, looking at the statue again, I now wonder if this is really a triple-bodied warrior. It’s not perfectly preserved: you can see that there had once been a second shield that has now disappeared, and there had probably been a third shield, too. The bottom halves of the individual warrior figures have also been lost. So perhaps this isn’t a triple-bodied warrior after all – our incomplete knowledge of the past hampering rather than aiding us again – and this might simply be a row of three warriors forming a kind of shield wall.

If you are interested in the problems surrounding the interpretation of (mythological) scenes in Greek art, I’d recommend you read Anthony Snodgrass’s Homer and the Artists: Text and Picture in Early Greek Art (1998). In this book, Snodgrass reveals that for much of the Archaic period, artists depicted scenes of the Trojan War that are not described in Homer or differ greatly from the texts that we currently possess, revealing the dangers inherent in interpreting ancient objects based solely on knowledge gleaned from ancient texts.