February 2022
In a brief passage of Pausanias’ Periegesis, the second century AD geographer records an incident involving an apparent lover’s gift which, at first, seems to have very little connection with warfare. The more we explore the issues and characters involved, however, the more a link seems to be suggested.

Pausanias (3.16.2-3) records that the Spartan general Phormion lived in a house at Sparta close to the Sanctuary of Hilaeria and Phoebe. This house was originally the home of the Dioscuri, Castor and Pollux (or Polydeuces), twin sons of the mythological Spartan king Tyndareus. Castor was the mortal son of Tyndareus and his wife Leda. Pollux was reputedly the son of Leda and Zeus (who famously seduced Leda in the form of a swan). Twins from two different fathers involving the fertilization of two separate eggs are certainly possible, and the myth may have been a way of explaining some aspect of the brothers’ parentage. The nearby shrine to Hilaeria and Phoebe had been erected to the two girls, daughters of Leucippus (the Leucippides), later abducted by the Dioscuri. Before we get to other interesting aspects of the myths associated with the twins’, however, let’s return to Phormion’s house in Sparta. 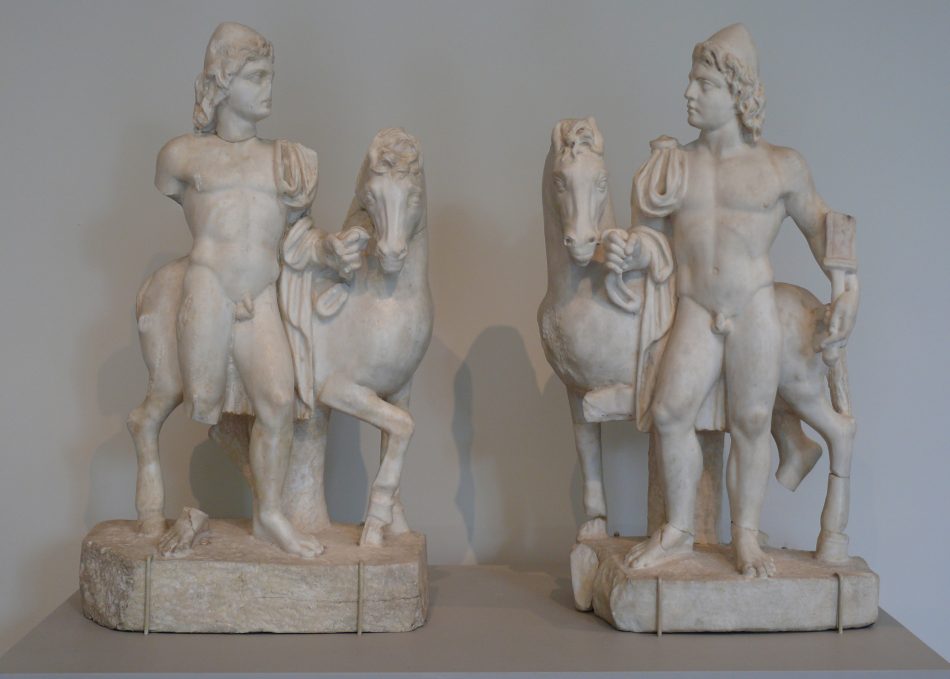 A pair of Roman statuettes of Castor and Pollux in the Metropolitan Museum of Art - note the intimate association with (white) horses
The Dioscuri had come to Phormion’s house at Sparta in the form of strangers from Cyrene and asked that they be given hospitality. They requested the room in the house which had been theirs as children. Phormion replied that they could have any other part of the house, but that the room in question was occupied by his daughter. In the morning, Pausanias phrases what happened as that the daughter’s “girlish apparel had disappeared” or that both she and her clothes had gone (3.16.30). Translations differ as to whether it was the clothes or both the clothes and the girl that were missing – abduction is the more likely.

In her place on a table in the room was silphium. Silphium, especially its heart-shaped seed, was associated with love, sex (and romance) from relatively early in Greek history. Catullus later mentions it (as lasarpicium or “laser” (which according to Pliny (Natural History 22.49) was the juice of the silphium plant) in one of his love poems to Lesbia (Catullus 7, line 4). The association of silphium and love was thus early and continued. The heart-shaped seed depicted on coins from Cyrene from the sixth century BC onwards seems to make the association with romance and the ‘love-heart’ particularly old (I have been fortunate enough to purchase two small bronze coins from Cyrene with ‘love hearts’ on them and present them to my wife). The conclusion was obvious: just as the Dioscuri had abducted Hilaeria and Phoebe, they took Phormion’s daughter too. The proximity of Phormion's house to the shrine to those earlier victims of abduction by the Dioscuri perhaps suggested as much. Setting aside the distasteful implications that the twins had deflowered (and abducted) Phormion’s daughter, there are several fascinating aspects to the story. Check back tomorrow for part 2!