Ancient Warfare at the Museum - 1 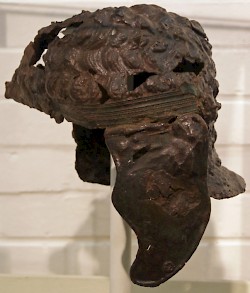 The captions in Ancient Warfare are usually very succinct, and allow little space to provide more than the barest information about the item shown with the article. Not so, obviously, on the web. So in this new series we’re going to go through older and newer issues of the magazine, as well as our pretty extensive library of photos. We’ll pick one, and tell you something more about it. To start with, we take a waaaaaaay-back trip down memory lane, to Ancient Warfare I.3, ‘Shields, helmets and armor’ (October 2007) with a Roman helmet now in the archaeological museum of Arlon, Luxembourg province, Belgium. 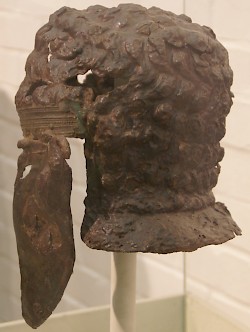 I included the photo in the article because the archaeological find seems to match a cavalry relief in the same museum (also shown in the article), on which at least one trooper apparently wears exactly that style of helmet. In Continental academic parlance, it’s a helmet of the Weiler/Koblenz-Bubbenheim type, after the findspot of the first example of this type of helmet, or a Robinson Auxiliary Cavalry A. Whichever nomenclature you prefer, it’s a style of helmet from the very early Imperial period and almost all examples come from northwestern Europe. The helmet covers the entire bowl of the top and rear of the head with a shallow neck protector, hinged cheek pieces, a decorated strip from ear to ear across the brow and, most strikingly, the helmet bowl has been worked into a 3D stylized representation of hair (unlike the helmets from Nijmegen and Xanten that used actual hair to get the same effect). Though this particular helmet was found without face mask, it’s certainly possible it was used with one. Masks such as the one found in Kalkriese, fairly narrow and apparently not made to be permanently attached to the bowl, may have been worn with this such a helmet. 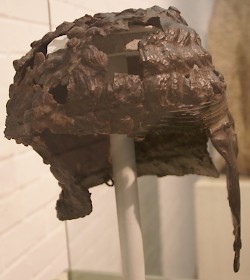 Helmets such as this one are generally thought to have been used by cavalrymen. There’s the iconography - see the obvious connection with the relief mentioned above - but also because of the short, shallow neck protection compared to the very generous plates provided with infantry helmets, and because these helmets are roughly similar to the ‘parade’ helmets described by Arrian. Can we deduce which unit would’ve used this helmet? Probably not, but it might be fun to speculate a bit. The helmet is dated to the first half of the first century AD and was found in the territory of the Treveri, a tribe that claimed Germanic descent but may have spoken a Celtic language. Culturally ‘diffuse’ perhaps, just as the Batavians further north who used similar helmets. Both tribes were Roman allies, exempt from tribute, and provided the Romans with famous cavalry units and revolted in AD 69. Tacitus tells of a cavalry unit of Treveri (Annals III.42) trained in the Roman way which served in the area, and we know of an Ala Gallorum Indiana led by the Treveran nobleman Julius Indus, which served both in this area and in Britain. Is it certain this helmet was used by a cavalryman in one of those units? No, but it’s not unlikely. 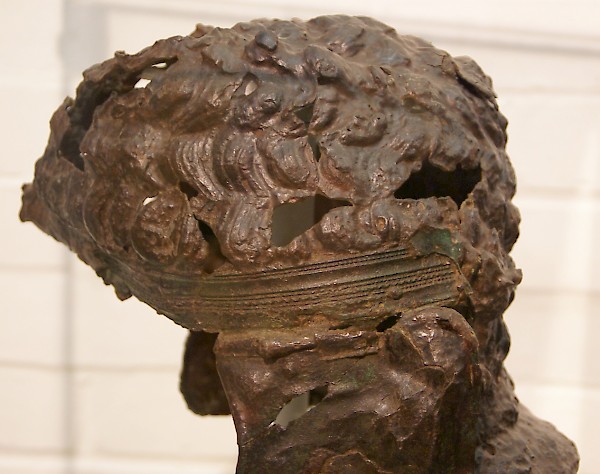